Mary Prince and her Bermudian Identity

The History of Mary Prince, a West Indian Slave greatly impacted on the campaign for the abolition of slavery in England and its colonies. It exposed the horrifying reality of life for enslaved peoples in the late eighteenth and early nineteenth century. In Bermuda, Prince’s narrative is greatly significant, for as Cyril Packwood writes in his landmark publication ‘Chained on the Rock: Slavery in Bermuda’, slave registers were not kept on the island ‘until the 19th century’. Prince’s narrative is unprecedented in its account of the daily life of slaves on the island. 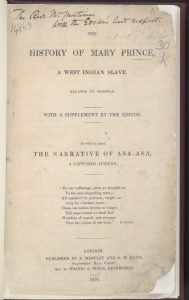 In the last 20 years, interest in Mary Prince has risen in Bermuda, and in the last 10 years steps have been taken to place Prince at the heart of our contemporary Bermudian consciousness. This has culminated in Prince being named a National Hero on the island in 2012, and recently in 2020, the second day of Cup Match (an annual celebration of Emancipation on the island) was also renamed after Prince and is now called Mary Prince Day. Prince’s place in Bermudian society has not always been recognized or regarded with respect, though in recent years, extensive work has been done to unpack Prince’s life in Bermuda. What has yet to be explored in depth is Prince’s own Bermudian identity.

It was only when reading Prince’s narrative again for my Victorian literature class at university that it became clear, in my mind, that elements of her narrative are strikingly Bermudian. The idea of Mary Prince being considered a Bermudian or a Bermudian citizen is of course complicated by her enslavement, but it must also be noted that Prince considered the island to be her ‘native place’ and where she lived ‘the happiest period of [her] life’. For this reason, I think having an understanding of what we can attribute to her Bermudian identity is important, and it may be part of how Prince saw and understood herself. Prince’s narrative may offer us insight into what can be thought of as an early Black Bermudian identity and culture present in the lead up to Emancipation. Elements of her Bermudian identity and Black Bermudian culture are most evident in her speech. I would also like to suggest that the sections about Prince’s life in Bermuda are also permeated with what we may refer to as Bermudian culture, though especially Black Bermudian culture in the context of enslavement.

Prince’s Bermudian identity is suppressed in this narrative as a result of her story being transcribed by non-Bermudians. Whilst Thomas Pringle, Secretary of London’s Anti-Slavery Society and editor of the narrative, attests to keeping Prince’s ‘exact phraseology’, we must remember that the purpose of Prince’s narrative is to report on the abuse and violence she experienced as an enslaved woman and aid in the fight for Emancipation. With this aim in mind, elements of her speech may have been altered so that this message could be clearly related to Pringle’s British readership. That being said, elements of what can be thought of as Prince’s accented speech are still detectable. One such moment is ‘Hamble Town’, which is where Prince and her sisters Hannah and Dinah, are first sold into slavery. To Bermudians, ‘Hamble Town’ is immediately recognisable as the capital of Bermuda, Hamilton. It appears as though Susanna Strickland, the transcriber of the narrative, has recorded Prince’s speech phonetically, confusing the short /i/ sound in Hamilton for a /b/ sound, making the word “Hamble”, before presumably adding “town”. 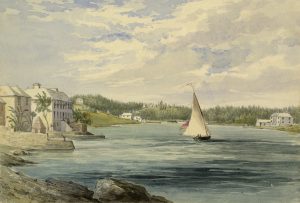 “Head of Crow Lane Harbour.” Prince’s father, a sawyer was enslaved to Mr. Trimmingham, a ship-builder at Crow-Lane. From an album of original watercolour paintings and sketches of Bermuda made by Johnson Savage MD, Royal Artillery, between 1833-36.

More overtly, Prince’s opening lines allow us to further consider her as a Bermudian. Prince’s own way of describing herself being born at Brackish Pond is part of a tradition that many Bermudians still use today; locating oneself and one’s family heritage is often done through geographical locations on the island. Prince’s opening lines are interesting for this reason, for she explains that she ‘was born at Brackish Pond on a farm belonging to Mr. Charles Myners’. Here, she immediately situates herself within the context of enslavement on the island. We see other Bermudians also defining themselves and their families through geographical locations on the island.

In the early 19th century, a John Harvey Darrell, a relative of Robert and his son Richard Darrell (Mr. D––– and Dickey in the narrative), defines the Darrell “tribe” based on land ownership and property, using family homes to establish which tribe he belongs to. Prince’s identity however cannot be defined in the same way. At this point in the narrative, Prince makes it clear that her and her family are seen as being the property of enslavers. Thus, her attempt to define herself based on the geography of the land, and naming Brackish Pond as the site of her birth, can be thought of as a revolutionary act, as she works to root herself to the island looking beyond the scope of property. Prince may even be legitimising her Bermudian identity in these opening pages, working to ensure that readers are aware that she considers herself to be a person of Bermuda.

Mary Prince’s life in Bermuda and her identity in relation to the island is a fascinating topic that requires further study. In my postgraduate endeavours, I am eager to dive deeper into Prince’s life and to pick out what can be thought of as the beginnings of Black Bermudian culture around the period of Emancipation, especially when it comes to enslaved women. As more information about the lives of enslaved Bermudians come to light, more must be done to understand our past. 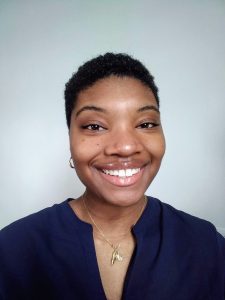 Jaylen Simons is a recent graduate of King’s College London, where she completed her BA in Classical Studies with English. She also worked as a summer intern at the National Museum of Bermuda in 2019 and in 2022. After completing a postgraduate teacher-training course, she plans to return to academia and pursue her MA in English, focusing on Slave Narratives.

NMB offers 4-week and 8-week summer internship opportunities for undergraduate and graduate students, and recent graduates. The internship programme is supported by the Museum’s annual fund, The Anchor Fund, and the Ministry of Youth, Culture, and Sport, Government of Bermuda. To learn more: https://nmb.bm/get-involved/volunteering-careers/.