*From the archives. This article first appeared in MARITimes 2018 Vol 31

The year was 1918 and most of the world had been at war for four years. At the start of the conflict, Bermudian Cassie White was 25 years old and halfway through her nurses’ training at the Hospital of the Good Shepherd of Syracuse in New York. Four years later, White had completed her training and was on the frontlines in France with the American Red Cross, doing her part in the war effort.

White’s contribution–and that of countless other nurses and doctors–was critical in the newly mechanised field of warfare. Antiquated military strategies and equipment of the previous century were replaced with the most modern and technologically advanced methods of war–mass-conscripted armies, advances in communication, rapid transport by land, air, and sea, chemical warfare, and weapons capable of high rates of fire. All of these changes ultimately resulted in an unprecedented loss of life—as many as 10 million dead and 20 million wounded. With so many wounded and dying, doctors and nurses were essential to the war effort.

White enlisted with the American Red Cross during a significant wartime jump in its membership, from 17,000 adult members in 1914 to more than 20 million in 1918, 20,000 of them registered nurses destined to serve in the military.

In February 1918, White set sail for Europe and arrived in France where she was attached to US Army base hospital No 31. Barely two months after arriving, White was given the devastating news that her younger brother, Private Walter A. White, had been killed in action. He was 21 and a member of the first Bermuda Volunteer Rifle Corps contingent sent into action.

White’s brother, Walter A. White, who died April 14, 1918 from wounds received in action while serving in the Lincolnshire Regiment with the Bermuda Volunteer Rifle Corps

White threw herself into her work with new-found resolve. By mid-July, she was travelling by ambulance to the base hospital’s mobile Evacuation Hospital Unit (EHU), the first stop for soldiers wounded at the front. White was quickly promoted to Chief Nurse of the EHU and over the next six months ran hospital units and dressing stations for the flood of wounded. Her memoir, now in the Museum’s collection, details what life was like at the EHU.

After dinner, patients began to pour in and, oh, how they came—the worst cases that I have ever seen; ambulance drivers putting them all over everywhere, the surgeon not being able to operate fast enough. I was put in the Operating Room for the afternoon and all next day, everything being upside down, for we were not prepared for patients. That afternoon several more nurses arriving on the scene to help us and we were very glad to have them. Such wounds and oh, the poor boys dying so fast, it was murder and just made your blood run cold to see the boys, but not a word from any of them, they were so patient and oh so good. 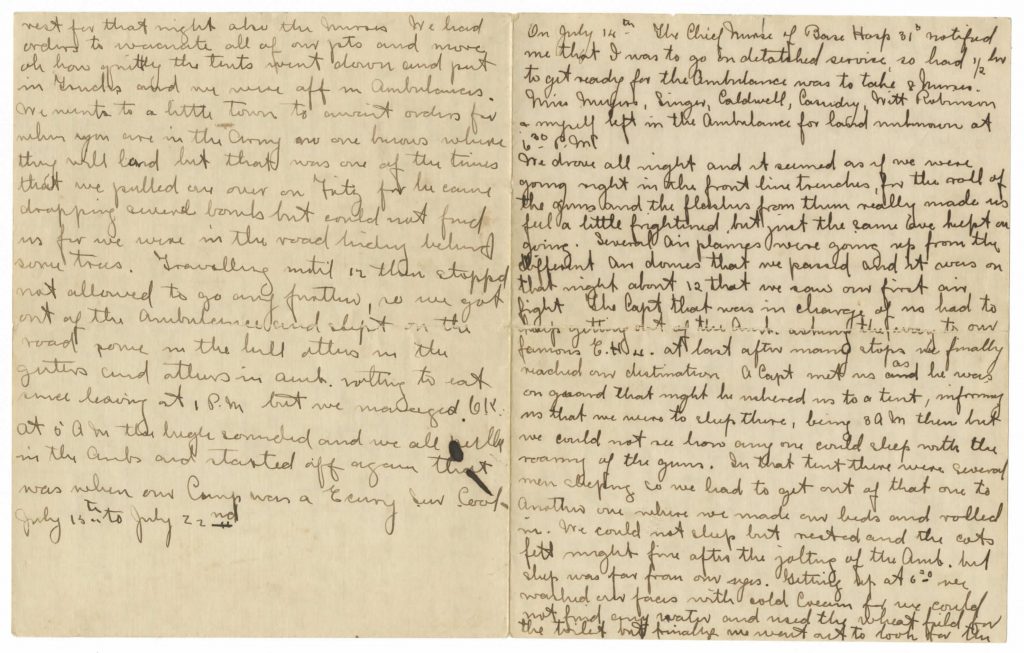 White and her fellow nurses assisted with dressing and amputations, moved hundreds of patients out of the line of fire and buried the dead, especially difficult and dangerous given the muddy shell-pocked quagmire surrounding them and the constant threat of attack from German planes. Working up to 20 hours a day, with meagre food and water rations and under constant threat of shellfire, the field stations were far from safe. During her time there, White helped bury two of her fellow nurses.

Oh, how we did dread to see the moon shine…It did help us in one way, for it gave a little light for us to see how to work, but on the other, it aided the [enemy] to find us. They were flying over us all the time and oh, one night when [a German plane] came down so close to me to leave his card, I, for one, almost died, being the first time that I have ever heard him so close. Happily he flew over my tent before dropping the bomb and after he left us I went to my other tents to see if my [patients] were OK.

He came the very next night and used his machine gun. Patients with splint on both legs got up and ran for the wheatfield, and all the day nurses and officers and men slept in the wheatfield, too.

White’s wartime actions were particularly remarkable and prompted General John J. Pershing, Commander-in-Chief of the United States Forces in France, to cite her in 1919 for “conspicuous bravery and devotion to duty at great risk under fire.” She was awarded the Military Medal by the US Army for distinguished bravery, which is currently on display in the Defence Heritage exhibit in Commissioner’s House.