From the Collections: “Stalactite Caves in St. George’s”

Fraught with meaning, mystery, imagination, and history, caves have held a unique place in the minds of humans for millennia. They have been used as sacred sites that connect our world with the underworld, and the image of someone crawling into a cave to explore, pray, or leave their mark is one that resonates with many. Even today researchers continue to explore caves around the world finding fossils, new species, paintings, and artifacts belonging to early humans, and these discoveries shed light on the human experience and the deep meaning that these spaces can have.

From the Greek underworld Hades and Plato’s allegory of the cave to Alexandre Dumas’ secret cave in the Count of Monte Cristo or Jules Verne’s Bermuda based pirate submarine lair, caves have been central to narratives of reflection and discovery. 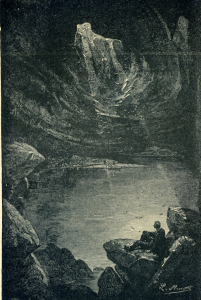 They are unknown spaces that lie between the borders of light and dark and are the perfect adrenaline-inducing setting for the discovery of the unknown. As you follow the intrepid hero crawling through the caves with light in hand, we all feel that terror when inevitably the light goes out and we imagine the worst possible monster staring back at us when the light inexorably flickers back to life.

I have been fascinated by caves since I was little. My parents would often take my brother and I to explore the caves at Tom Moore’s Jungle where our imaginations would run wild. With Jim Henson’s Fraggle Rock and Dad’s bedtime readings of The Hobbit as our inspiration, my brother and I would imagine the cave-dwelling friends we would meet who would accompany us on our journey to the center of the earth and help us slay the dragon that was no doubt around the next stalagmite.

It wasn’t until I first saw an image of the Lascaux Cave paintings, that my fascination turned to the historical role that caves have played in human history. 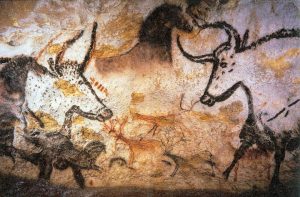 Although I never became a famous speleologist, my interest in caves has never disappeared and during my Ph.D. research I traveled to South Africa where I was able to visit the region known as the Cradle of Humankind. Located 50km outside of Johannesburg, in the Gauteng province, this region contains a complex network of limestone caves and along with the Horn of Africa and East Africa marks the birthplace of humankind. 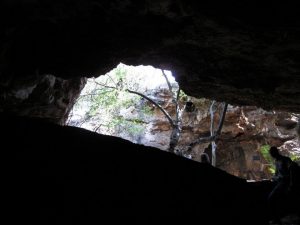 Years after first seeing the image of the Lascaux cave paintings and decades after my early spelunking adventures in Bermuda, I found myself in the Sterkfontein Caves where the remains of some of our earliest human ancestors have been found. Walking through these caves left me awestruck and humbled by the wealth of history that led to that precise moment and thinking about it now still gives me goosebumps.

When I came back to Bermuda and began work at the National Museum of Bermuda, I was enamored with the complex history that surrounds our tiny island and our connections with the wider Atlantic World. I buried myself in accounts of early shipwrecks in Bermuda, the history of women in Bermuda, slavery, civil rights, fishing, whaling and more. I tried to learn as much as I possibly could and the more I learned, the more questions I had. I’m still deep diving into the multiple facets of our history but every now and then something from the collections comes across my desk and reengages that early childhood fascination with caves.

Most recently, the museum acquired a 19th-century painting by Lieutenant Francis Henry Boyer of the British Royal Engineers. The image is believed to be of a party exploring “Stalactite Caves, in St Georges”. 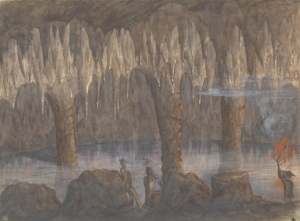 The first documented account of caves in Bermuda is from 1624 when Captain John Smith recounted that there are “verye strange, darke and cumbersome caues”. Over 170 caves have been recorded in Bermuda, with nearly a dozen caves recorded as “destroyed”. Many of these caves have borne witness to four centuries of human activity in Bermuda and are sites of survival, scientific discovery, remembrance, and tourism.

Bermuda’s caves and their ecosystems are important to understanding the natural history and geology of the island, and many scientists have explored and documented our cave systems throughout the 19th and 20th centuries.

Dockyard’s cave system, which was partially destroyed in the early 19th century during the construction of the Royal Naval fortifications, was documented by Lieutenant Nelson of the Royal Engineers in his 19th century report On the Geology of the Bermudas. Nelson’s report, which was written around the same time that Boyer painted the caves in St. Georges, includes descriptions and in some cases diagrams of some of the caves uncovered on Ireland Island and the discoveries found within them.

A gold knee buckle and a canister shot were dug up in a coarse limestone, whilst excavating the foundations for one part of the North Basin, across the bottom of the cavern.

Nelson’s report also describes other “caverns” in Bermuda and introduces the role that these sites played as popular visitor attractions.

The caverns are numerous, and many of them very beautiful. The largest, and geologically speaking, the most instructive is Bassett’s, near Somerset Bridge. It is said to extend for more than a mile; but the first few hundred yards of toilsome progress usually satisfies the curiosity of the majority of its visitors.

Discovered in the early 20th century by two young boys, Carl Gibbons and Edward Hollis, Crystal Caves and the nearby Walsingham cave system are probably the most visited cave systems on the island and have been the inspiration for a number of films and television shows. In fact, Crystal Caves was a filming location for the first movie ever to use footage shot in a cave.

Filmed in 1914, Neptune’s Daughter starred Olympic swimmer Annette Kellerman as Annette the Mermaid, the daughter of King Neptune, who is determined to avenge the death of her younger sister. Crystal Caves is used as the home of a sea witch who grants Annette the means to become human and seek out vengeance.

Bermuda’s caves are still one of the top visitor attractions on the island and though many visit these sites out of a curiousity to explore the hidden depths beneath the earth’s surface, there are also stories connected with our caves that speak to the atrocities in our history. Stories and voices that have until recently been ignored or under-researched.

Throughout the world, caves have been used as sanctuaries and places of refuge and in Bermuda one cave, in particular, played an important role as a site of refuge. Today that cave is an incredibly important site of commemoration linked to a history that for too long was ignored or censored. Jeffrey’s Cave, located in Spittal Pond is named after enslaved Bermudian Jeffrey, who escaped his enslaver and hid in this cave. Escaping enslavement was an incredibly difficult thing to do especially on a small 21-square mile island. Escapes were often reported in the newspapers with detailed descriptions and those who managed to escape were often recaptured. After weeks of searching, it was believed that Jeffrey had managed to escape from Bermuda on a sailing vessel and the search was abandoned.

A young enslaved girl knew Jeffrey’s hiding spot and regularly delivered supplies to him. Unfortunately, Jeffrey’s enslaver noticed the girl’s behavior and followed her. Jeffrey was discovered, recaptured, and returned to enslavement.

The cave was renamed after Jeffrey and is a part of the African Diaspora Trail, which traces the legacy of slavery on the island. Knowing and understanding sites like this and stories like Jeffrey’s is an integral part of understanding and appreciating the depths of our history and provides us the tools to effectively confront the issues of the present.

Jeffrey’s story took place prior to Boyer’s painting but it is hard not to make a connection between the two. The painting adds to our growing collection of illustrations of Bermuda’s caves and our understanding of their history but also highlights that there is more to learn and discover.

Holding the only visible source of light, a makeshift torch, a figure stands on the edge of a calm glass-like body of water, with two onlookers waiting to follow. The whole scene conjures that ancient fascination with the underworld and the limitless spaces between light and dark and, for me, evokes memories of my childhood spelunking adventures. However, it also reminds me of the importance of shining a light into the unexplored areas of our history to reveal the missing stories that are vital to our understanding of Bermuda and ourselves.