The History of Mary Prince has long occupied a prominent place in the history of Abolitionist literature in the Atlantic World as one of the most influential autobiographies written by a formerly enslaved woman. Mary Prince’s roots in Bermuda are well known. There is another printed freedom narrative not previously associated with Bermuda, however, that illustrates a man’s perspective on slavery in the island and in the maritime economy. This account languished in obscurity, self-published in London in 1847 by an English physician named Andrew Welch. 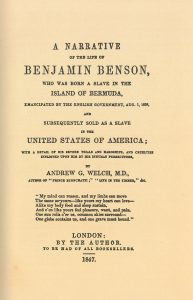 Just thirty pages long, A Narrative of the Life of Benjamin Benson was too minor to be noted in contemporary literary periodicals such as The Gentleman’s Magazine or the Edinburgh Review. The British Medical Directory’s 1853 obituary of Welch notes he was “a most successful general practitioner” but lists only one of his several medical publications and none of his other work. The Library of Congress in Washington, D.C., acquired a copy of A Narrative in 1949 and that may be the only surviving original.

There is some uncertainty about the timing of Welch and his family’s travels between London and Florida, where they lived in the 1830s. His first two non-medical publications described experiences during the Second Seminole War in Florida. A few years after his return to England around 1840, Welch met a destitute man selling religious tracts on the streets of Worcester, just west of London. Welch invited Benjamin Benson to his home, and then narrated his “eventful history”, at times quoting Benson’s own words.

Benson provides a few biographical details about his early life, but much remains still unknown, including the origins of his surname. He “inhaled his first breath of life as a slave”, born 16 December, 1818, at St. George’s, too early to appear in surviving parish registers. He did not know if his parents were “lawfully married”, a vexing subject in Bermuda during the years following Emancipation. He recalled that his father was African-born, trafficked to the Caribbean before Bermuda. His mother was born in Long Island, New York, and sold at age 12 to a man named Davenport in Bermuda, almost certainly St. George’s merchant John Davenport or his father Robert. Perhaps she was the woman named Judy, Lilly, Philippa, or less likely the young Nancy, listed in John’s possession in the 1821 Slave Register. If his mother remained in Davenport’s control, Benjamin may have been born in Esten House on King’s Square in St. George’s, bought earlier in 1818. His parents had 21 children together, including twins, “one or two” dying as infants but most surviving to adulthood. 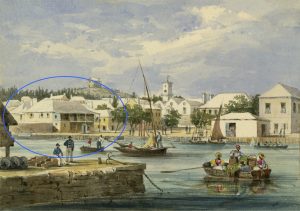 Esten House pictured on the left, “The Market Square, St. George’s – from Ordnance Island.” From an album of original watercolour paintings and sketches of Bermuda made by Johnson Savage MD, Royal Artillery, between 1833-36.

His memory of childhood was punctuated by the traumatic sale of his father, a brother George, and sister Judith, sold away to Georgia when Benjamin was just eight. One brother, Robert, was sold away to Wilmington, North Carolina, from where he escaped to New York before moving to Trinidad under an assumed name. Another, Anthony, was freed by the bequest of “Miss Davenport” upon her death at age 18.

Anthony worked on pilot boats until moving to New York in the company of a Methodist missionary named Smith, becoming a preacher himself. Another sister, Sally, was freed and taken to New York by Quakers, where she remained in contact with Anthony. Benjamin’s other siblings were sold away before his birth, and he lamented not knowing what became of them.

In the same year his father was taken from him, Benjamin’s owners disfigured his face with a knife to discourage him from running away, and others from kidnapping him, then branded his shoulder as an additional identifier. Both marks he bore for the rest of his life. Not surprisingly, he had very conflicted memories of his childhood, the somewhat lighter duties of a house boy being measured against the arbitrary cruelty often associated with domestic slavery in close quarters. No Benjamin is listed with Davenport as owner in the 1821 Slave Register, but Davenport’s parish assessment includes £10 value for “Phillipa’s Child”, the same valuation given until 1829, so this is likely him.

His life took an abrupt turn around 1830, when, at age 12, Benjamin was sold to an American named Sneed, who took him to Mobile, Alabama. The ship carrying Benson held 300 others, likely an American vessel trafficking enslaved people from Alexandria or Baltimore, a rare reference to Americans purchasing enslaved Bermudians in the years before Emancipation. Alongside illegally imported Africans, Benson was forced to work on Sneed’s cotton plantation near Mobile, and then on his rice plantation near New Orleans. 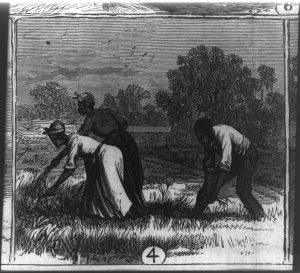 He vividly remembered the terrible tortures, the horrors of the swamp, the arbitrary violence. After two years, Benson was sold to a man named Tech in North Carolina, to labour in turpentine production, the South’s third largest export. Tech was a gambler and a brute who lost his estate to his debts. His property was auctioned off, severing enslaved people from their families and friends. 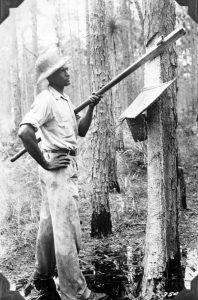 Remarkably, Benson was bought by a man who was almost certainly Bermuda’s Thomas SJ Trott. Trott delivered most of his human purchases to St. Kitts plantations before returning with Benson to Bermuda. To his delight Benson’s mother was still alive, although each was aged beyond their years by grief and trauma, and nearly unrecognizable. Benson was allowed three days, “the first holidays he had ever known”, to spend with his mother, though only when her labours allowed. He had returned to Bermuda on the eve of Emancipation in 1834 and was soon rejoicing that the “dark cloud of tyranny” had passed at last.

Legal freedom did not bring economic opportunity however, and now Benson’s mother depended on him for support. He remained in Bermuda as a free man for a year but higher wages drew him away from his home onto the sea once again. Much of the life story Benson told Welch is a complex history of maritime labour, stretched between Atlantic ports from Halifax, Liverpool, New York and New Orleans.

Long distance voyaging exposed Benson to systematic racism and abuse, to re-enslavement and escape. However, mobility also carried him on the “common wind” of Black Abolitionism in the Atlantic, bringing him both news of family members enslaved in the USA and allies who tried to help him free his father.

Eventually Benson made his way to England in the company of a Bermudian arrowroot merchant named Martin. Perilous employment in Wales, in a copper mine in Cornwall, and as a waiter in various spots, however, had ruined his health by the time Benson met Welch on the streets of Worcester in 1847. Benson told Welch then that he was trying to return to Bermuda, and perhaps he did so, but by 1851 he was in London helping organize a prestigious gathering to commemorate West Indian Emancipation.

“The audience were especially well pleased with the splendid style in which Mr. Benson related several amusing anecdotes concerning his own experience and knowledge of intemperance, and gave ample evidence of their pleasure by their hearty applause.”

Ultimately Benson found success lecturing about alcohol rather than slavery, and even claimed the first was a greater danger than the second. Perhaps he saw in the temperance movement a message of self-improvement and respectability that appealed to a man whose life was spent reeling against the currents of marginalized labour.

There are other curiosities in the numerous reports of his lectures: his stated birthplace varies widely and is often American, and he claimed to have traveled to India and China, which seems unlikely. By 1860 Benson was married and in Dublin, still lecturing while running various businesses such as a “coffee palace and restaurant” and a temperance hotel. What became of Benson after this last enterprising venture collapsed in debt in 1866 is unknown. For now at least, though research continues.

Freedom narratives like Benson’s have often been treated with suspicion. Either the enslaved were not believed to be reliable witnesses to their own lives, or their voices were assumed to be obscured by white editors. Historians now emphasize the verifiable details, the remarkably precise memories, and the individuality of these sources.

Welch’s edition exposes aspects of slavery in Bermuda that are little documented: branding, mass sale to Americans on the eve of Emancipation, and arbitrary cruelty. Why did Benson later downplay details of his own experiences at the hand of those men and women slaveholders who Welch called Benson’s “inhuman persecutors”? Whatever the answer, A Narrative of Benjamin Benson does make clear what Benson himself valued: the sanctity of his parents’ marriage, the importance of kinship, and the possibilities offered by the maritime world.