What is it, how is it relevant and how is it done?

“And people make their history out of the context that shapes them.”

“For the World is old, but the future springs from the past.”

During an episode of the TV documentary Finding Your Roots one of the guests, filmmaker Ava DuVeray, listened as host Henry Louis “Skip” Gates told a surprising story of her family history. She learned how her ancestors, originally from Saint-Domingue, left during the uprising of 1791 that eventually evolved into the Haitian Revolution. This revolution profoundly shaped her genealogy and personal life and the telling also underscored how important the larger holistic discussion of Atlantic World History is to all who were formed by its events.

What is Atlantic History?

The key to understanding civilizations of the countries of the “littoral”—the technical term—is understanding how their interaction with the Atlantic has formed them. The Atlantic World is of necessity diverse in terms of cultures and people. Geographically it takes in north, west, and southwest Africa, the Caribbean Basin, Western Europe, North America, and South America; and most essentially it includes Bermuda. 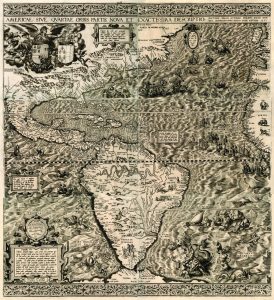 1562 Map of America by Diego Gutiérrez. Library of Congress

Atlantic History is a history of those relationships. Originally, it concerned the years from 1415 to 1850. Our new understanding has a much larger scope of time, of the last 1,000 years. Many of the forces that shaped the Atlantic World began as early as the year 1000, as did some initial forays. As history is about context as well as events, it is useful to begin so long ago: to include the Magna Carta, the Trans-Saharan trading system, the rise of the Toltec Empire, the formation of the Kongo kingdom: all of these events would contribute to the flow of history that poured into the Atlantic World. To understand the formation of the cross-cultural connections after the 15th century, Atlantic history encourages us to go back in time, to at least the beginning of the last millennium. 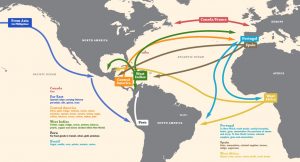 Map illustrating the movement of commodities, people, and resources in the Atlantic throughout the 16th century

Atlantic History examines major events that shaped the people of the region and of today, especially as the Atlantic World laid the foundation of globalism and modern institutions. It encompasses Atlantic Age Enlightenment Revolutions like the British American Revolution, the Latin American Revolutions including the Haitian Revolution, and the French Revolution; Abolitionism; Atlantic human trafficking; European colonialism; trading networks; smuggling; migration, and population movement.

How does Atlantic History affect Bermuda?

How did the Atlantic Age of Revolution shape Bermudian history? Where did its people come from? How did its people contribute to colonisation, smuggling, and contraband, and did they shape the character of Bermuda’s political culture today? What were the Atlantic roots and influences of well-known institutions until now seen as local, from Bermuda’s distinctive architecture to its cassava pies and codfish and potatoes (clearly Atlantic products) to its Gombeys? How have Bermuda’s people influenced the physical environment, and what is the history of that relationship that repeats today in otherwise invisible cycles? How has Bermuda changed over the last 1,000 years, having had people on it for less than half of the millennium? Have Bermudians broken 1,000-year cycles or are they repeating them, unwittingly? Atlantic History tries to answer all of these questions.

How is Atlantic history done?

Atlantic History requires a multidisciplinary approach. It is not inter- or intra-disciplinary in which one discipline tries to do what another discipline does better. Multidisciplinary means that one discipline communicates and cooperates with another and together as distinct disciplines answer and present on questions of history. It demands the involvement of archaeologists, geographers, poets, writers, paleontologists, meteorologists, psychologists, philosophers, political scientists, technologists, sociologists, communicators, actors, and musicians. It requires experts in Bermudian History, Caribbean Basin History, African History, US History, British-American History, Latin American History, European History, Mediterranean History, even Asian History. The Atlantic Historical narrative is more than just research—it is also presentation: discovering new information about the Atlantic World and bringing it to the people in any form required. All of these disciplines examine an aspect of Atlantic World History and communicate their findings to each other and to society as a whole.

Atlantic World History’s relevance is that it understands how these questions shape present lives and provides tools for the future. The past may not repeat itself, but past events can and often do. History gives us the tools to understand and master these events, and thus avoid their negative consequences. By that, we learn as a people.