Bellarmine Jugs: Magic in the Collections

As Halloween is soon approaching, I looked through the NMB’s collection to find objects with a magical connection or spooky history. Often, these artefacts that belie the mystical and supernatural connections are  everyday objects. Bellarmine or Bartmann jugs are a perfect example of this.

These salt-glazed stoneware jugs with their distinctive and easily recognisable bearded face and  potbellies were manufactured in Germany throughout the 16th and 17th centuries and were primarily used to store and transport water, wine, ale, oil and vinegar before glass became widely available.

These jugs were ubiquitous, shipped all over the world. They have been identified on archaeological sites around the globe, providing evidence of extensive colonial trade networks. Two jugs, excavated from the Sea Venture wreck, are on display in Shipwreck Island, National Museum of Bermuda.

For this project, I started researching Bellarmine jugs, beginning a fascinating journey to unravel a story that involved European folklore of ‘wild men’ and witches, a Catholic cardinal, and the power in a name. 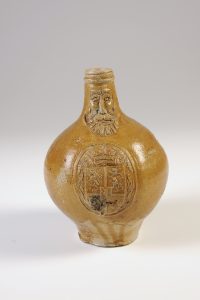 Two jugs from the Museum’s collection are currently on display in Shipwreck Island in the Queen’s Exhibition Hall and were recovered from the Sea Venture wreck.

Any fan of horror films, urban legends or the supernatural will tell you that names have power. To know something’s true name is to have power over it. In history or archaeology, to know the name of something, or how it changes over time can give insight into its meaning or use throughout history.

Also known as bearded-man vessels, greybeard jugs, wild man vessels, witches’ bottles, or charm bottles; Bellarmine or Bartmann jugs have a variety of names which hint at their religious and supernatural connections. As we explore the different names that people have given these objects at different points in time, we can unlock the intangible and powerful meanings that these objects held for the people who used them. In doing this, we can explore how  everyday objects can be imbued with power both figuratively and sometimes, literally.

The name “Bellarmine” is the most common moniker attached to these objects, and was used by the English in the 17th century, the same period when the two jugs on display would have been wrecked in Bermuda in the hold of the Sea Venture. The name is thought to have been inspired by Roberto Bellarmino, a 17th-century Catholic cardinal. The jugs were in use in England during a period when Catholic and Protestant relations were especially tense. 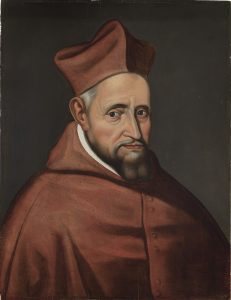 Born in 1542, Bellarmino was professor of theology and served as a judge in his capacity as a Cardinal Inquisitor during the trial of philosopher and mathematician Giordano Bruno, who was condemned to burn at the stake for his views on the cosmos and planetary movement.

Bellarmino was also a strong opponent of Protestantism and publicly condemned it in his writings. In England, tensions between Protestants and Catholics reached a boiling point during the 16th and 17th centuries. English Catholics were forced to abandon or hide their beliefs and an explosive plot to bring down the Protestant Parliament and replace it with a Catholic one was hatched.

During this fraught period of religious tensions, Bellarmine became the face of Catholic opposition and it is perhaps no surprise that some began to refer to the bearded face jugs as Bellarmine jugs, turning them into representations of the political and ideological atmosphere of the time and a representation that would allow Protestants to literally smash their opponent.

However, bottles with bearded faces existed long before Cardinal Bellarmino, and also deeply connected to the European folktale of the wild man. The bearded man or wild man has been a part of folklore for as long as stories have been told. Readers may be more familiar with the with “Bigfoot” for the modern-day form of the folklore.

One of the more famous wild man tales is the story “Iron Hans” or “Iron John” by the Grimm brothers. It tells the story of a wild man with magical powers who helps a young prince on various adventures. The prince, in turn, helps to lift the curse placed upon Iron John at the end of the fairy tale.

These tales of wild, hairy, bearded men living on the edge of civilization and are thought to be the inspiration for some of the engravings of bearded men on the jugs and bottles of the 14th to 16th centuries.

The bottles’ magical history does not end there. The magical elements of the “wild man” story became a practical application for the jug when they were used as “witch bottles” or “charm bottles” to ward off evil and curses. Given their connection with Protestantism and Catholicism it is perhaps surprising to hear that these bottles became ritual objects used in a manner which would find some burned at the stake by Catholics and Protestants alike.

To create a charm or witches bottle they could be filled with a variety of objects: fingernail clippings, human hair, iron nails, bent pins and even blood or urine. The bottles were then sealed and hidden upside down around the home, often above fireplaces, or doorways.  Not all witch bottles were bearded men jugs. Ordinary bottles could be used and the tradition continued long after bearded men jugs were available to buy. 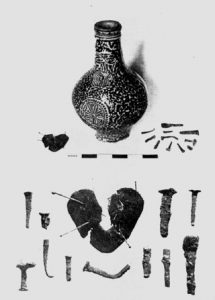 Contents of a witch bottle found in 1926 on a Thames beach in London, “The Bottesford Witches, Bellarmine Witch Bottles” By Bob Sparham: https://www.bottesfordhistory.org.uk/content/topics/bottesford-witches/7-the-bottesford-witches-bellarmine-witch-bottles

So be warned, if you happen to be doing a bit of DIY around your home and come across a bottle that has questionable liquids and objects inside, I’d recommend leaving it alone!

If you’d like to see Bellarmine jugs in person, visit the National Museum.