Bermuda has a unique history of segregation. In 1834, the Bermuda House of Assembly completed the emendation of the Emancipation Act of 1833, and passed two Abolition Acts: Abolition Act I abolished slavery and Abolition Act II eliminated civil disabilities based on race. But to avoid the implications of racial integration arising out of Abolition Act II, public places such as the post office, the hospital, the movie theatres, schools, hotels, restaurants and places of employment became private.  This move successfully divided the two races, and the de facto policy became more stringent than any law. Black Members of Parliament, Dr E. F. Gordon, Sir Edward Richards, Russell Pearman and Wesley (‘Bip’) Tucker vehemently objected to the system but, as a minority in the House, could not to bring about legislative change.

A minor change came in February 1951 when Mrs. Georgine Hill, a member of the New Theatre Guild, purchased tickets at the Bermudiana Theatre Club for herself and sister-in-law Carol Hill.  This prestigious theatre attracted renowned international actors as well as tourists. Mrs. Hill, a native of Boston, was familiar with many of the actors’ names and looked forward to hearing and seeing them in person. To her surprise and annoyance, on the evening of their arrival, they were refused admittance because they were not members of the club.

Realising the significance of the refusal, Mrs. Hill set up a series of protests to draw attention to the injustice. First, she and Carol Hill picketed in front of the theatre’s office on Front Street. When this failed, she wrote to the Secretary to the State of Colonies and finally to the British Member of Parliament.  Her determination became successful when the Bermudiana Theatre Club was eventually forced to admit any member of the public regardless of race.

In June 1959, several young people decided to form a group to break down segregation throughout the entire island. They called themselves the Progressive Group and held their meetings at the home of one the members, Edouard and Rosalind Williams in Flatts.  From the beginning, the decision was made to be anonymous and that their meetings and actions were to be held in strict secrecy.  Members were selected and carefully scrutinised for their ability to keep their mouths shut.  This was important for several reasons. Those in authority were known to punish anyone with impunity who did not adhere to the status quo.

Many of the members were recent college graduates and knew that their hard-working parents, although not connected with the protest against segregation, would have their mortgages revoked.  There was also the possibility of the group receiving a jail sentence on a trumped-up charge if discovered.  Since the group comprised of young people and were not regarded as prominent citizens, Bermudians would not take their mission seriously.

Their secrecy worked. The general consensus was that the Progressive Group was part of a communist party, or had Americans who were connected with unrest in the United States as its members.  The stereotype that Black Bermudians could not keep a secret helped to make the boycott of the theatres successful. 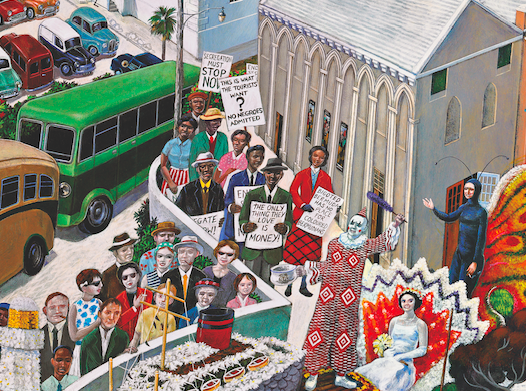 Going to the movie theatre was a popular form of recreation for most Bermudians in the 1950s but how could a protest be executed by an anonymous group?  The plan however was carefully executed.  Letters were typed on a copying machine called a gestetner (named after David Gestetner its inventor) and the one purchased for the Progressive Group was obtained by two Canadian teachers, Anna Wheal and Ruth Cordy, friends of Elizabeth Kawaley and house guests of Izola and Gerald Harvey. The Harveys were members of the Progressive Group. On the day the two teachers were returning to Canada, they were being driven to the airport by Gerald Harvey in his taxi and they stopped into the store to “purchase” the gestetner on the guise that they were interested in an antique copying machine.  All letters were typed on this machine but could not be traced to anyone in the Progressive Group.

These letters, outlining plans for a boycott, were placed, in a clandestine manner, on the steps of The Recorder, a black newspaper.  Ira Phillip, the editor at the time, had no idea from where the letters originated, or who was involved. But he published the information.  The Royal Gazette picked up the news from The Recorder and the authorities, when they read the information, dismissed the boycott as ‘a storm in a teacup’ and those behind the idea, ‘hoodlums’.

The Progressive Group, undaunted by the many threats, continued with the plan for a boycott.  They were aware that the authorities, unable to find out who were the instigators planning what they believed was anarchy, questioned Bermudians they perceived to be troublemakers but to no avail.  Even the Special Branch from the UK was hired to solve ‘the mystery.’  They too failed. The members of the group had a goal to desegregate Bermuda, once and for all and they were going to execute their plan, but without violence.  One outstanding feature of the group was that no one violated the trust for secrecy.

The time came to execute instructions for the public to carry out the boycott. Several members gathered at the home of Izola and Gerald Harvey, to make posters and when completed, they formed groups of three to cover the eastern, central and western parishes. Wrist watches were synchronised for ten o’clock so that each group could secretly glue the posters to as many telephone posts as possible without being detected. Flour and water were used instead of commercial glue to further conceal their identity. 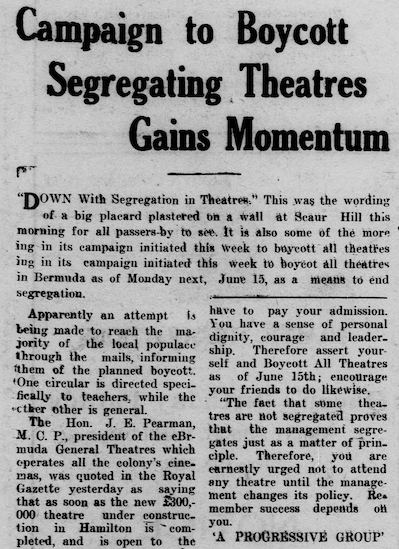 Posting the flyers on the telephone poles was successful.  On Monday morning, June 15, 1959, the island awoke to find instructions on how to boycott the movie theatres.  Many tried to decipher the mystery but, in the end, a crowd gathered outside of the theatres with placards denouncing segregation. 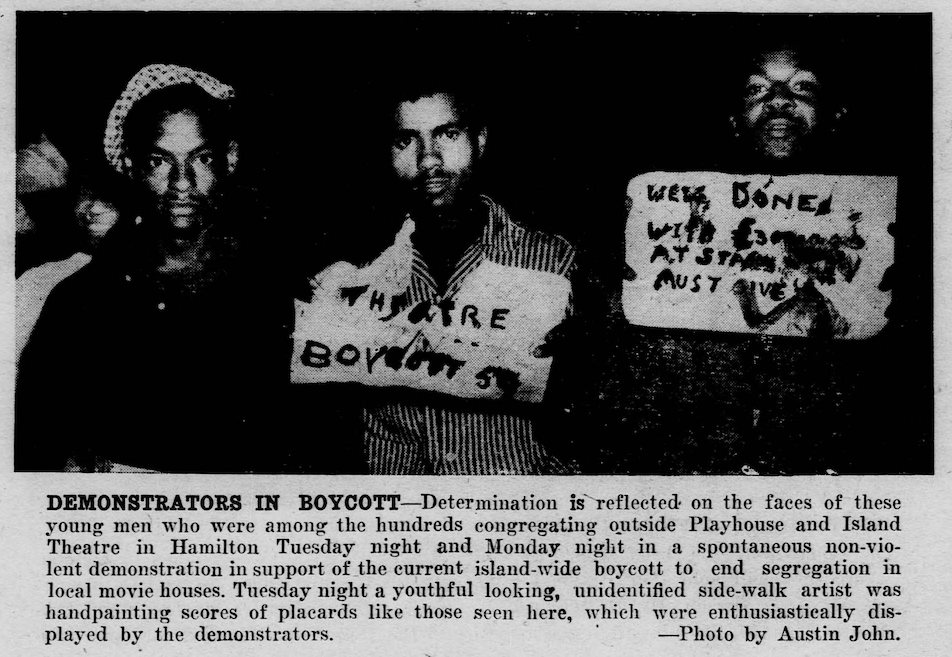 Richard Lynch and Kingsley Tweed, not knowing the identity of the Progressive Group, held the crowd spell bound with their oratory.

The support of the boycotters helped to bring down segregation in two weeks without any disturbance or violence.  When the hotels and restaurants owned by Americans saw that their property was not damaged by the demonstrators, they decided to break down their racial barriers. This led the theatre owners to reluctantly acquiesce: for they were not only losing money but were unsuccessful in finding out the members of the Progressive Group.

On July 2nd, about two weeks later, the process to desegregate Bermuda began without any fanfare.  The identity of the Progressive Group became known after 40 years when the film When Voices Rise was produced retelling the story of segregation and the struggle against it. 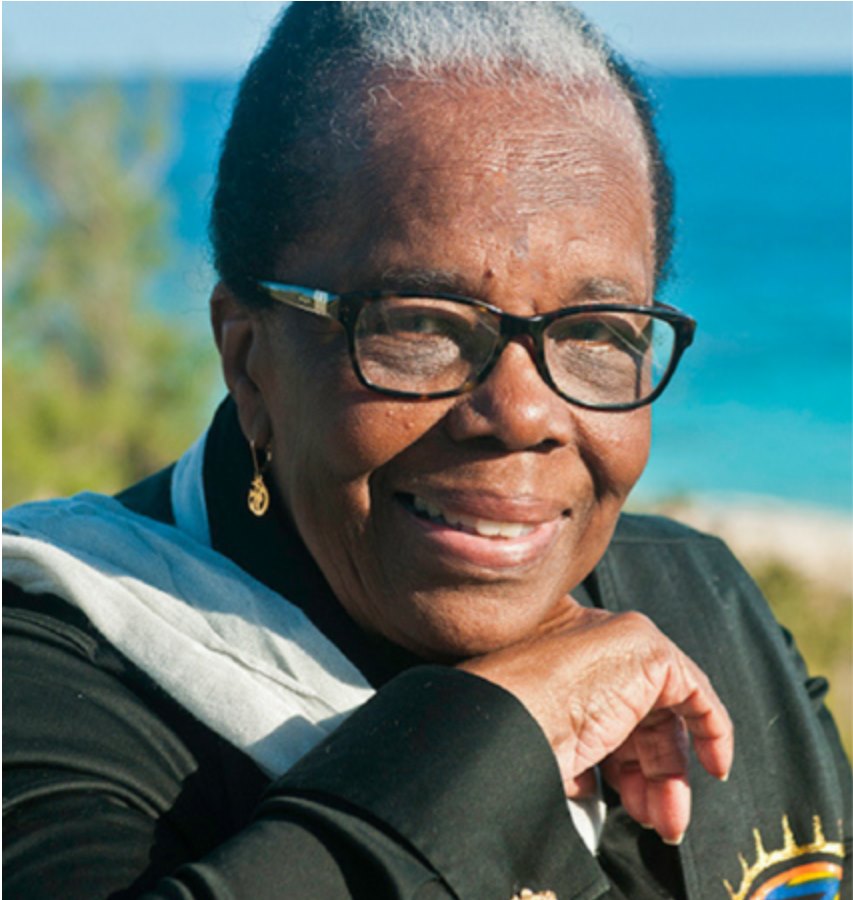 Bermudian author, storytelling and activist Florenz Webbe Maxwell was inspired to write at a young age. Her poem, A Song of Central, written when she was just 12, was later put to music and became Central School’s song. Of her experience at The Berkeley Institute, she said, “I enjoyed every English class and was fortunate to be given an excellent foundation in the mechanics of writing. Every spare moment was used in reading and writing original poems and stories…. The [school] motto ‘Respice Finem’ constantly reminded me as a student I had to work hard to do my best.”

Mrs. Maxwell was a member of the Progressive Group and her book Girlcott tells the story of 16 year old Desma Johnson who learns about segregation and racism through the actions of the Progressive Group and the 1959 Theatre Boycott. Girlcott won second place in the 2016 Burt Award for Caribbean Literature and was subsequently published to great acclaim. She has served on the panels of Coretta Scott Award, the Newbery Award, and the Americas Award. She has also served as a Writer in Residence at the Bermuda College where she taught a course in creative writing. As a retired librarian, Ms. Maxwell is still in demand as a storyteller, especially for Bermudian folk tales.

Listen to Florenz Maxwell’s interview with Radio New Zealand where she discusses her own experiences of inequality from growing up in Bermuda and as a member of the Progressive Group.