At Home on the Water

Bermuda Day this year has been different to say the least. Thanks to the efforts of BERMEMES, local groups, and the Department of Community and Cultural Affairs we were able to virtually experience the Bermuda Day Parade and the #BDAParadeChallenge was a wonderful added element to the virtual experience. However, May 24th is also traditionally the first day of the year when Bermudians head back to the water after a long winter break.

Swimming has a known therapeutic effect on the body and the mind. It is a healthy low impact exercise that can also have a meditative relaxing quality, so perhaps it is not surprising that as we emerged from the physical restrictions and mental health impact of an island wide lockdown in early May some residents took to the waves a little early with many flocking to local beaches and their boats as soon as the shelter at home restrictions lifted.

Even though Bermuda lies in the heart of the stormy North Atlantic, it is the perfect island for nurturing a relationship with the sea, with protected inshore waters, an extensive and shallow reef platform, and rich offshore waters. East end or west end, north shore or south shore, there are bays, holes, coves, beaches and inlets, ideal for almost any aquatic pursuit you can think of. The water is our largest national park, our wilderness, and our playground.

Every summer we delight in swimming from docks, beaches, bridges, rocks and cliffs; racing Comets, dinghies, model boats and powerboats; rafting up at Paradise Lake; diving and snorkelling; and fishing, whether dropping a handline off the nearest wharf, deep sea fishing, spear fishing, or standing on rocks worn smooth by centuries of other fishermen. 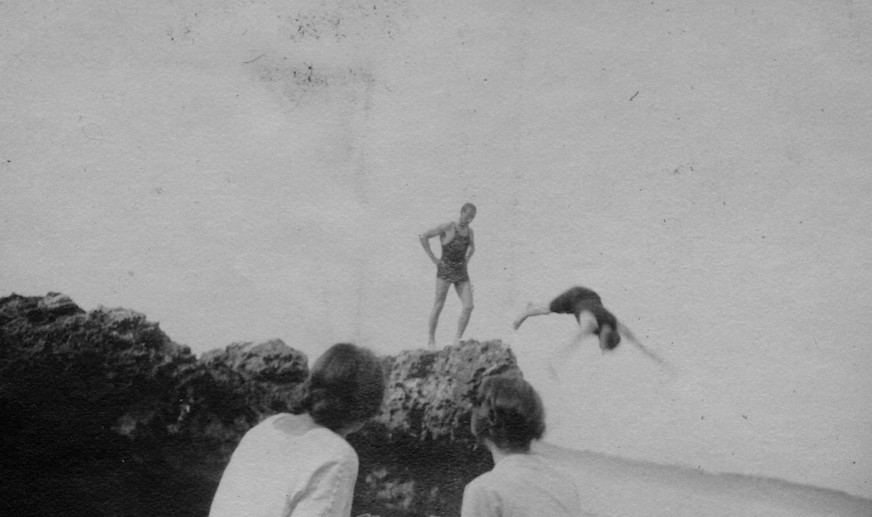 Diving off rocks on the North Shore c 1920

Making the most of our local waters for work or for play is deeply embedded in our history, and this quick look at Bermudian aquatic pursuits in the first 200 years shows how important that way of life was. It is likely that Bermudians’ ease with the water came from people who had roots in the aquatic cultures of Africa and the Caribbean. Many peoples living on the west coast of Africa and on the banks of the continent’s extensive river system travelled, played and worked on the water, and were proficient at swimming, boating and diving. As Kevin Dawson recounts in his book Undercurrents of Power: Aquatic Culture in the African Disapora, this knowledge crossed the Atlantic when people were captured and sold into slavery in the Americas, and likely informed the rapid development of swimming and diving skills among both black and white Bermudians. 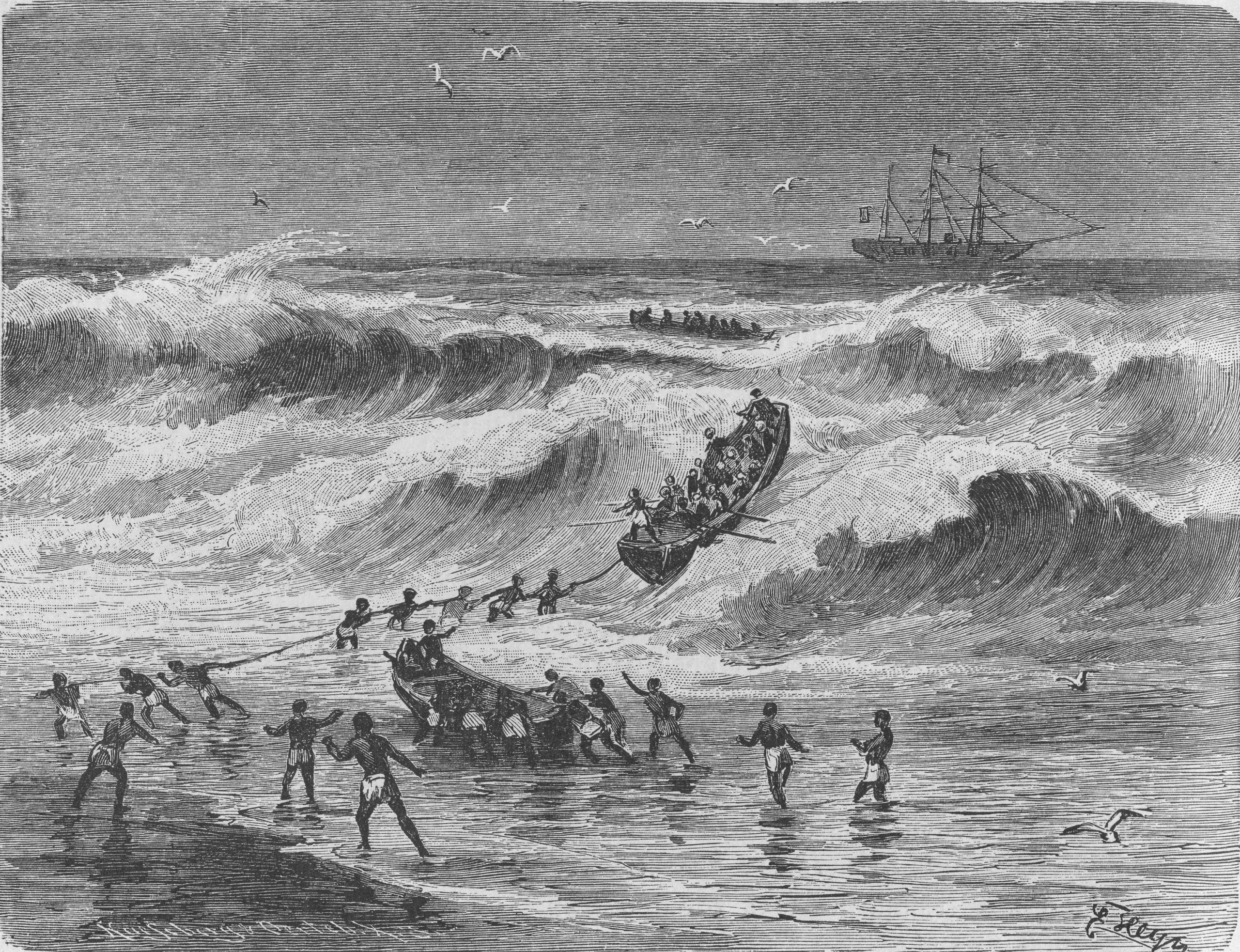 Indeed, the first people with aquatic expertise to arrive in Bermuda, aboard the Edwin, in August 1616, were “one Indian and a negro” who were to be employed diving for pearls. Though the pearl fishery was never realised, their skills were undoubtedly useful in the more lucrative pursuit of salvage, at first in local waters and, by 1650, in the Bahamas and the Caribbean. Bermudian wreckers, including enslaved divers, hit the jackpot when they worked on the wreck of a Spanish treasure ship on the Ambrosia Bank in 1687. Enslaved man James Locke, likely a diver, was able to purchase his own freedom and the freedom of his sister Betty and a young boy with his share of the proceeds. 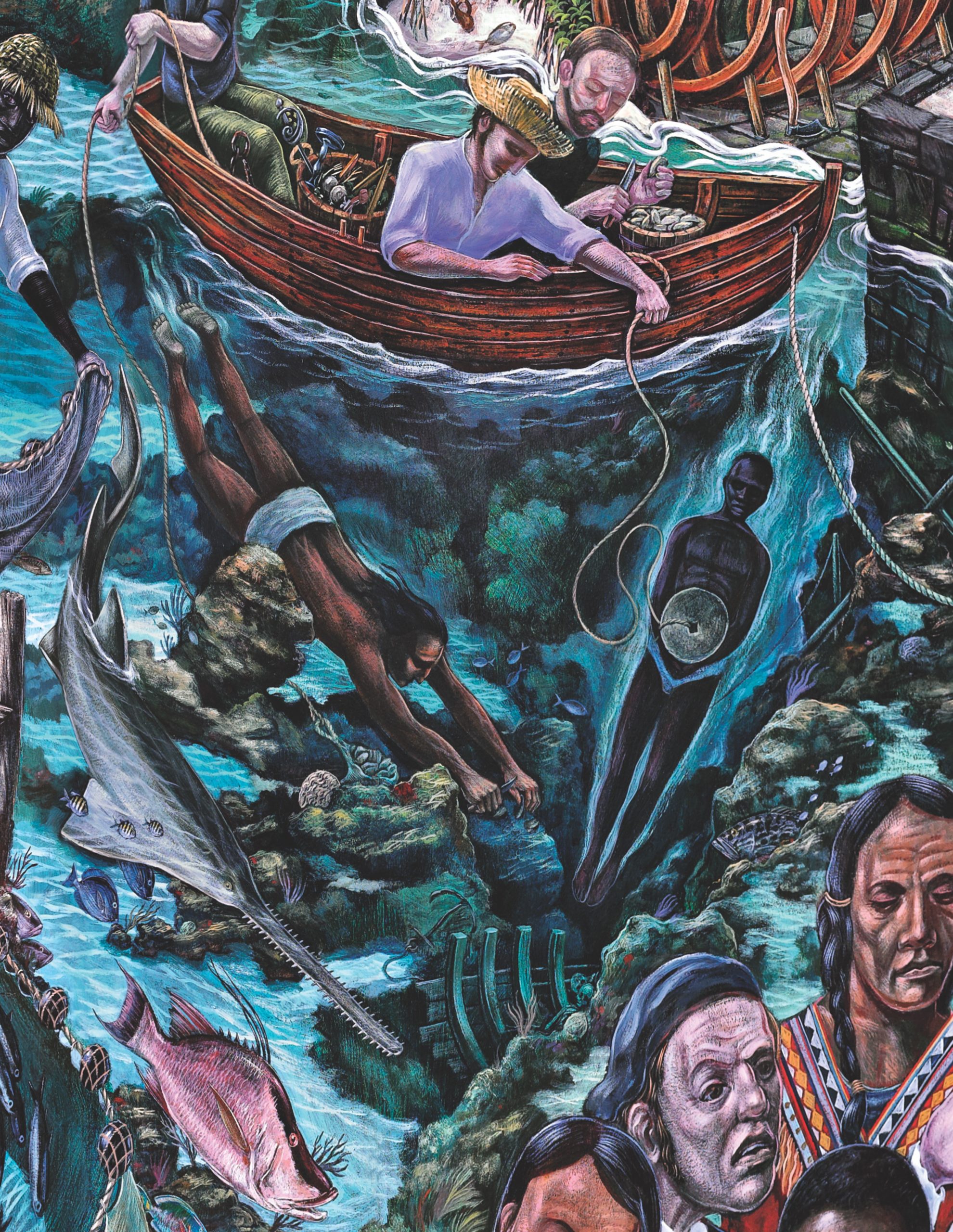 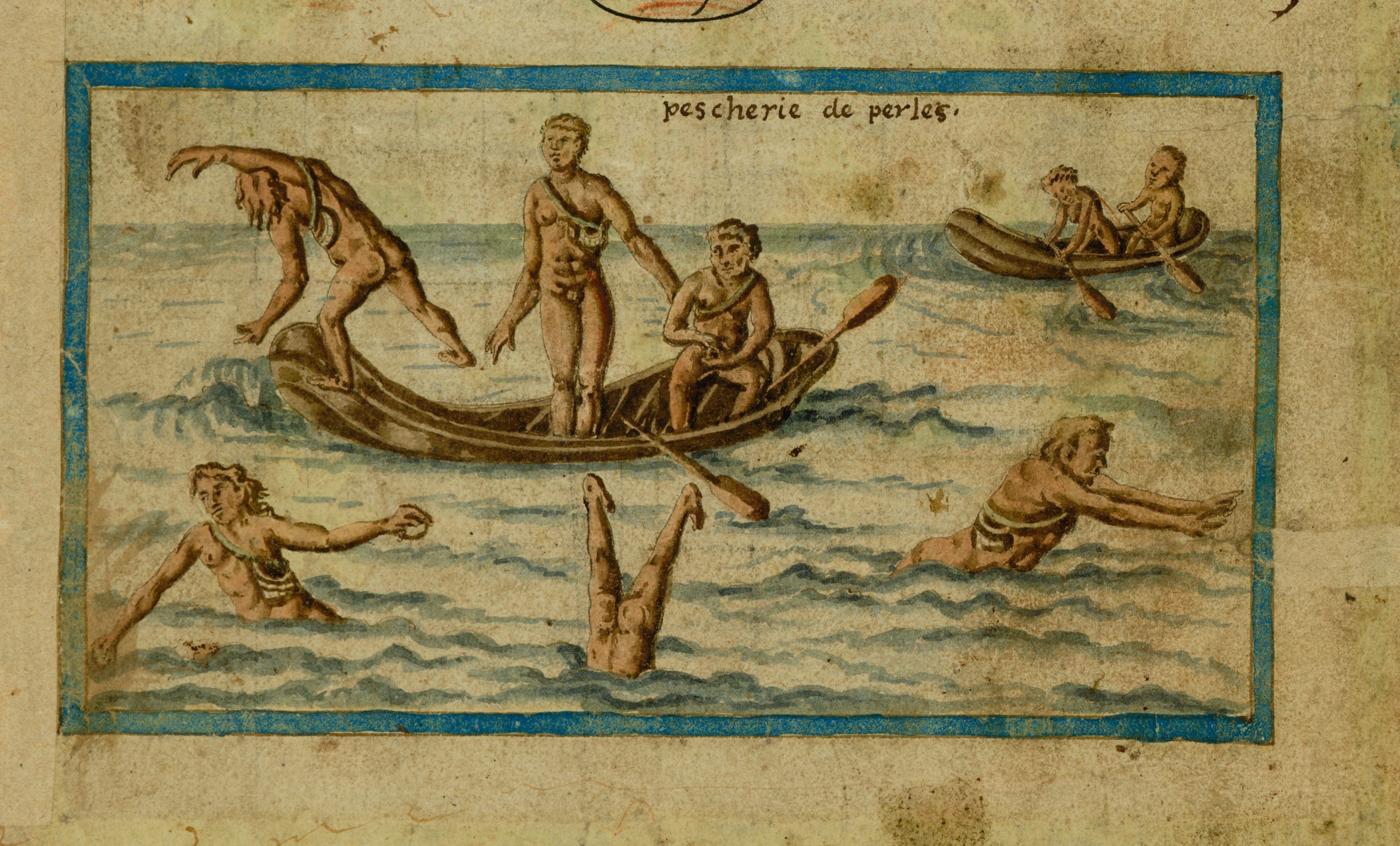 By then skill and ease in the water had become part of Bermuda life. In 1688, Governor Robert Robinson wrote that Bermudian children were “chiefly exercised in fishing swimming and diving”. Many other accounts echoed this theme, including that of French visitor Philippe Freneau, who wrote in the eighteenth century that Bermudians swam “from the time of their birth…[and] all the boys and many of the girls can live under the water and in it, pretty near as well as the fish.”

The same was true of boating: men, women and children, black and white were accustomed to using small sailboats and rowboats to get about. For enslaved people, small local boats offered not only opportunities to spend time alone together and to fish, but also to carry out the entrepreneurial activities which formed the black underground economy, such as operating ferries and trading fish, provisions and other goods. 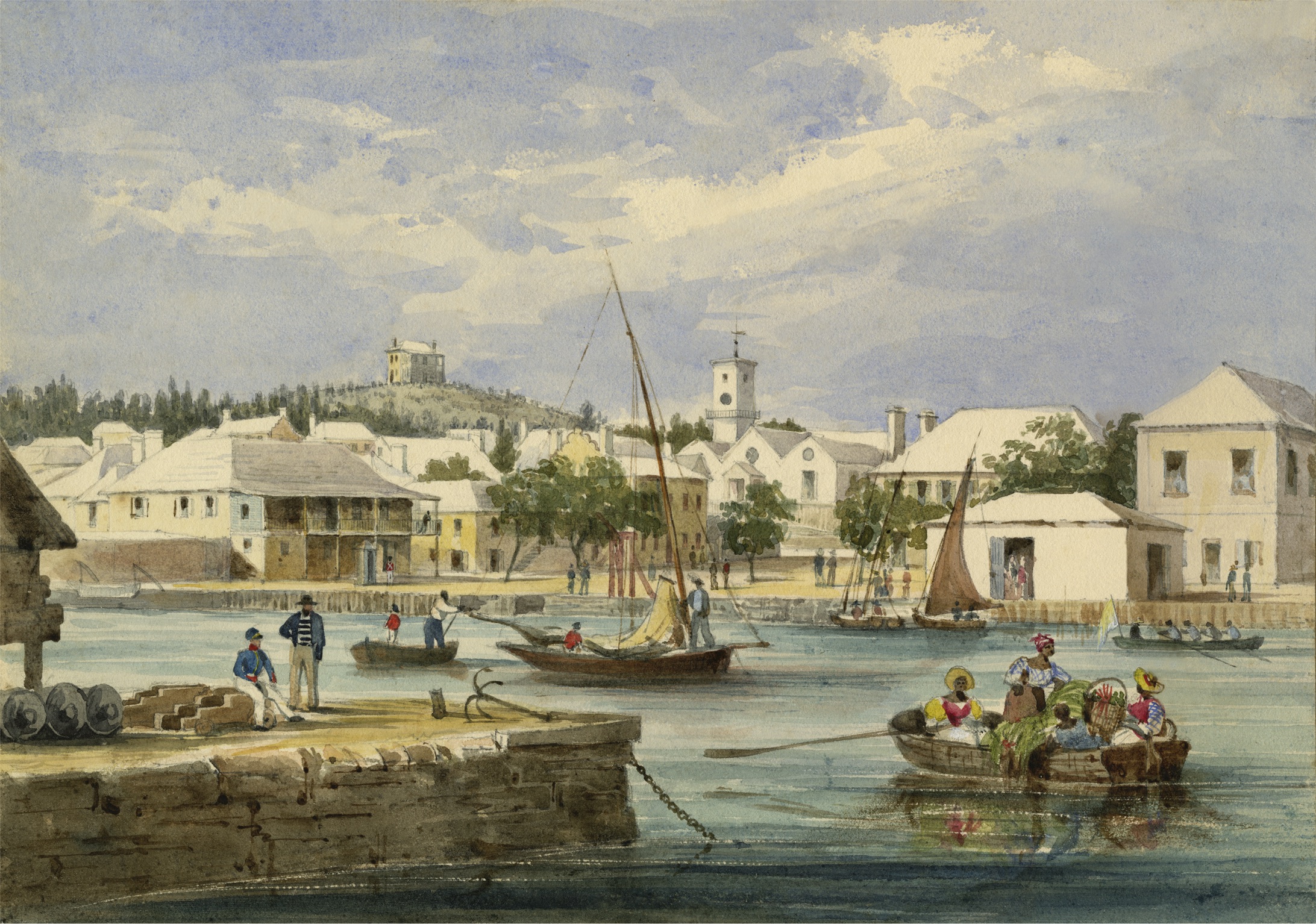 “The Market Square, St. George’s – from Ordnance Island.”
From an album of original watercolour paintings and sketches of Bermuda made by Johnson Savage MD, Royal Artillery, between 1833-36.

In both these frequent local voyages and at sea, swimming could be a life-saver. Governor Hope noted in 1722, “…tho’ their fishing boats are often overset by violent gusts of wind, yet it rarely happens that any are lost [because] all can swim.” The same was true at sea— in The Eye of All Trade, Michael Jarvis notes that some Bermudian mariners survived two and three shipwrecks over the course of their maritime careers, living through sinkings that took the lives of non-swimmers.

It seems particularly appropriate that the unofficial first day of summer, when many of us take our first swim of the year, should fall in heritage month, marking among other things, our long relationship with the sea.