An Enchanted Pile of Rocks

A History of Subsistence Farming in Bermuda

At the outbreak of the pandemic access to supplies was at the forefront of many people’s minds. Grocery stores were crowded as people filled shopping carts with meat, canned goods and rolls and rolls of toilet paper. This wasn’t just a Bermudian phenomenon but a global one and consequently the Internet is littered with amusing memes and gifs documenting the efforts people took to stockpile supplies and its consequences.

However, thanks to the hard work of our frontline workers and government over the past few months we have had enough supplies to get us through the pandemic and anyone with a view of the shipping channels I’m sure has been thankful every time they have seen the blessed sight of the Oleander making its way into Bermuda with another shipment of goods.

Even though Bermuda has been called an “enchanted pile of rocks”, a pile of rocks it is nonetheless, and times like these bring home the reality of our lives in a small, isolated, oceanic island.

Although we don’t have much in the way of natural resources, there was enough to sustain early castaways, who harvested local waters, foraged along the island’s rocky coastline and worked their way into the densely forested interior. They found sustenance in the native and endemic fish, birds and plants and the introduced feral hogs. Henry May, shipwrecked in 1593 wrote that “the tops of the Palmeta berries was our bread, and the iuce…our drink”. He was not so fond of the pawpaw which he described as “bearing a fruit in shape and colour resembling a melon, but unpalatable to the taste of a European..”

In the early years under the Company, the proportion of people to arable land made the growing of provisions for local consumption more sustainable. Although as much of the arable land as possible was turned over to growing crops, such as tobacco, for export, food was also grown for local consumption. Potatoes were introduced in 1613, and 1616 saw the arrival from the Caribbean of “Plantaines, Bananas, Sugar Canes, Sweet Potatoes, Cassave, Figges, Pynes…” in the ship Edwin. Indian corn was the staple, and a good store was kept in the magazines of the forts as a reserve. 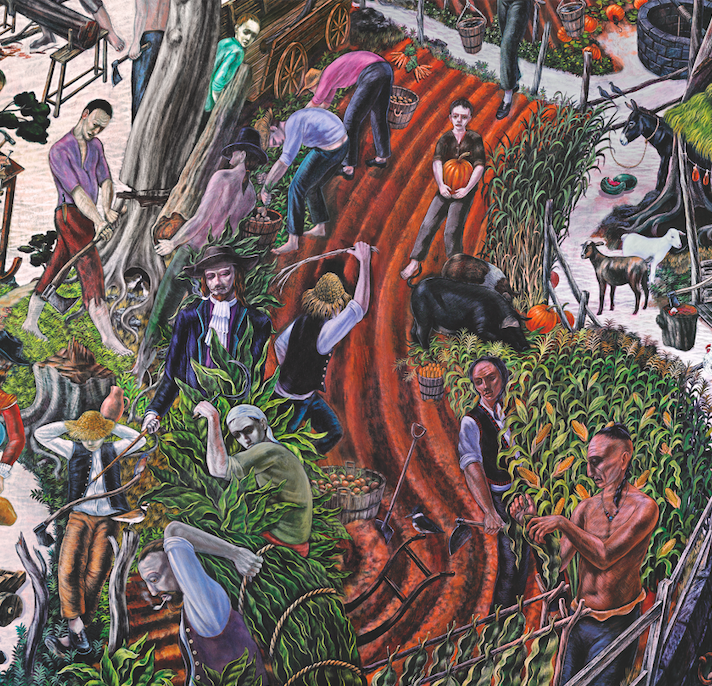 Early farming as depicted in The Hall of History by Bermudian artist Graham Foster.

An account by a Spanish mariner shipwrecked in 1639, provides information on the keeping of home gardens and livestock:

Each house has its portion of land allotted and marked out. They sow tobacco, corn and potatoes and ucca for making cassava flour…a great abundance of potatoes and corn, the ordinary food of the working people…There are some cattle, everyone breeds them to provide salt beef. They also raise pigs. They make a very rich and nutritious butter from large quantity of cow’s milk. There are a good number of chicken and capons, which run about the woods eating wild berries and sometimes they are given a little corn. Large flocks of turkeys. In most of the farms there are orange and lemon trees…many vineyards and rose trees and countless groves of fig trees…

The bulk of the work on these small farms and vegetable patches was carried out by enslaved labour, mostly elderly women and children. 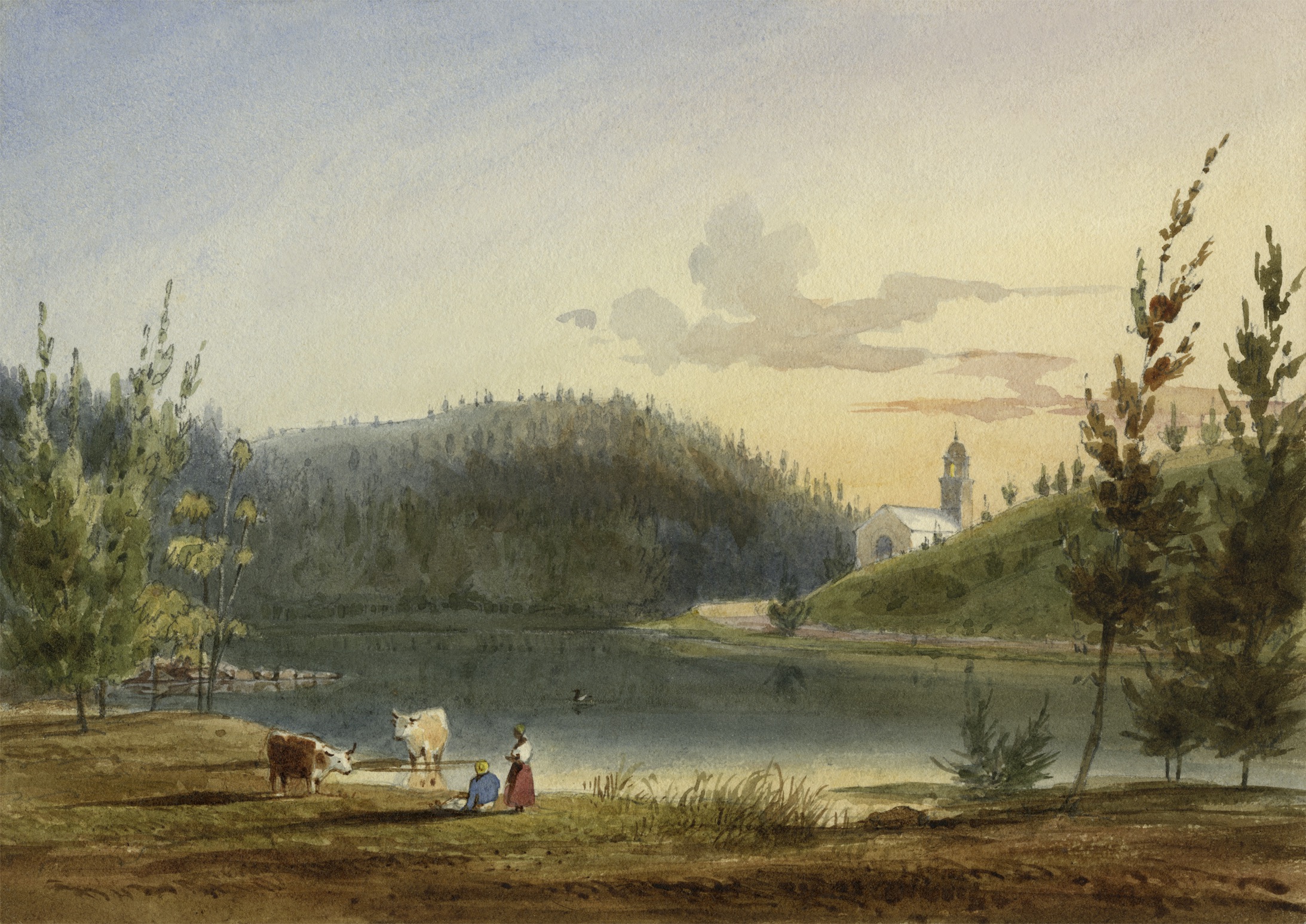 In the West Indies, the enslaved population were granted lots for self-provisioning, but by 1690 in Bermuda, this had been banned by the Act to Prevent Buying and Selling or Bargaining, presumably driven by the forbidden sale of the surplus from “independent provisioning grounds”. Nonetheless, there continued a thriving underground economy in produce as evidenced by the laws enacted against such activity. 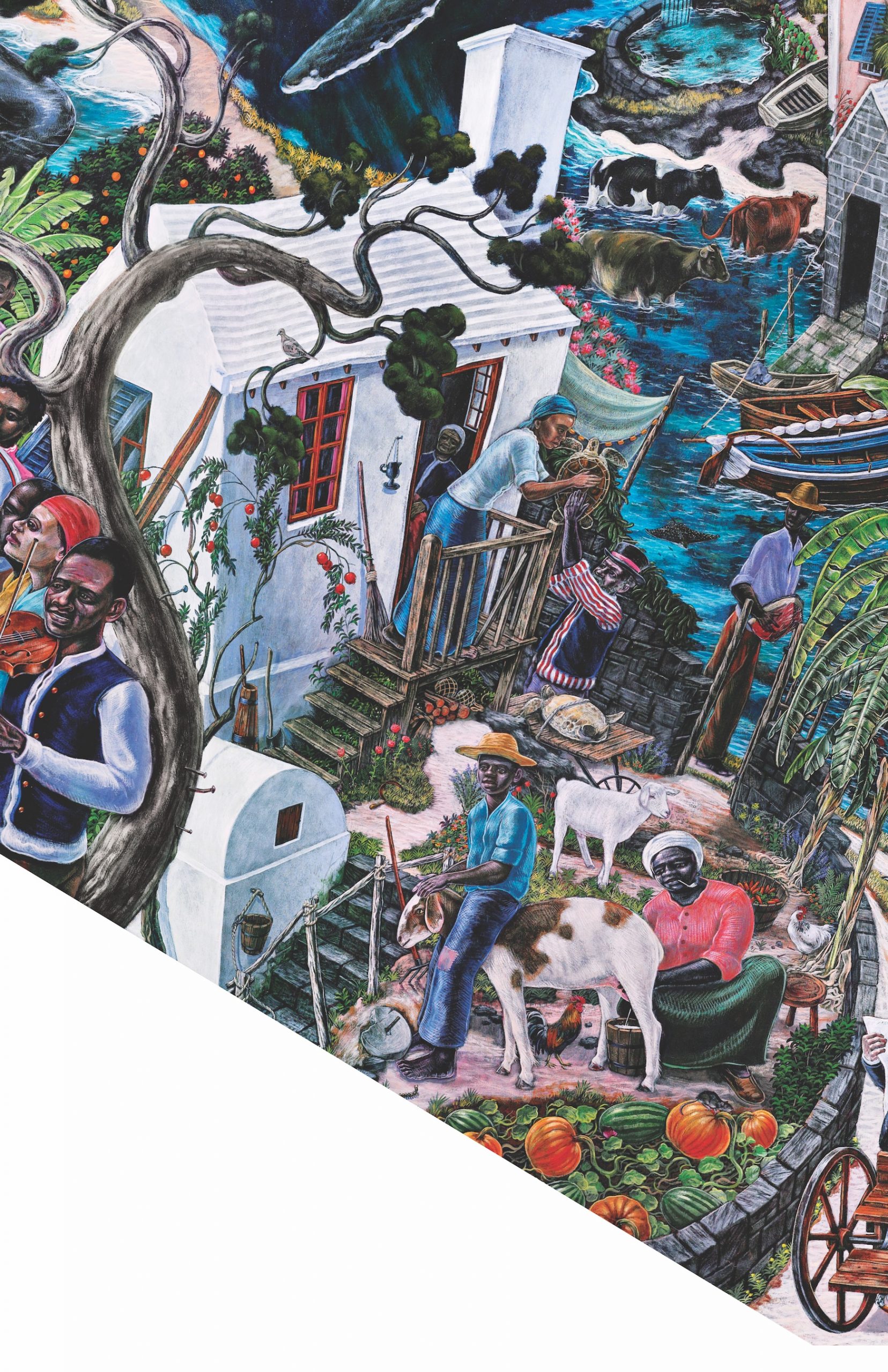 Hall of History: Black homestead with plantain tree. Man delivers turtles for cooking, popular even though turtles were protected by 1615. Another man delivers slabs of whale meat, diet staple for slaves.

As the population grew, it became more usual for staples to be imported, and local cultivation and maintenance of stores dwindled. By 1700 Bermuda had entered the boom and bust cycle which was to characterise the economy. Periodically, correspondence from the Governor of the day dwelt on concerns about poverty and food insecurity. In 1730, Governor Pitt bewailed the small quantities of food grown locally and noted that huge numbers of people had emigrated due to poverty and distress. Sporadic attempts were made to encourage farming, with limited success, and from time to time—especially during times of war— food export was prohibited, but food remained a concern.

Despite the concerns of a number of Governors, and continued reliance on imported staples, it appears that the maintenance of home vegetable gardens and livestock continued, accompanied by local bartering and sharing. In Life on Old St. David’s, E.A. McCallan recounts the memories of his boyhood in St. David’s in the 19th and well into the 20th century, and the lore passed down by older people. 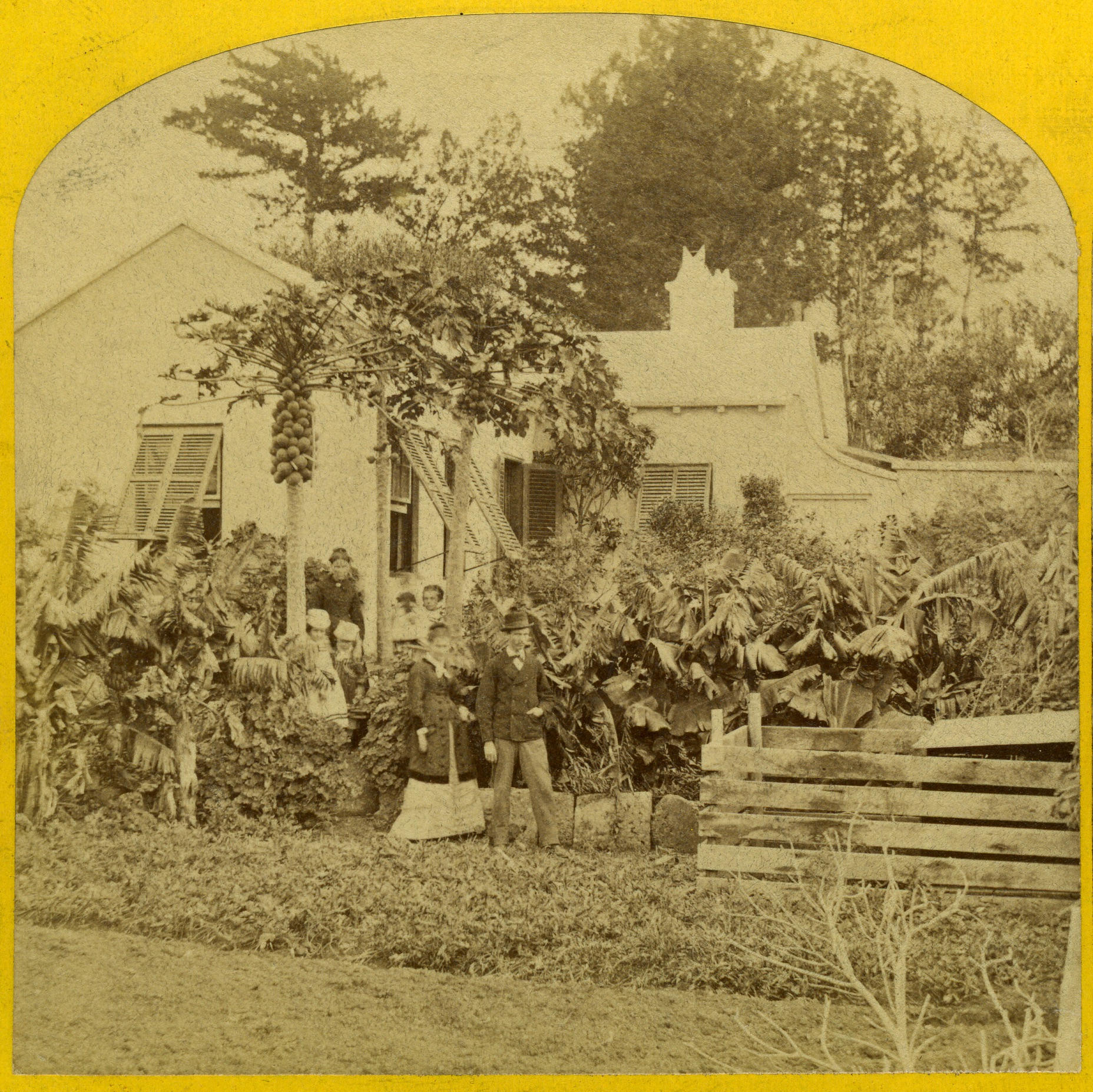 McCallan mentions the growing of sweet potatoes, pumpkins, watermelons, green-glazed cabbage, pawpaws, bananas, and plantains, along with the occasional peach tree, grapevine, or sugar apple, and thyme, parsley and red peppers to spice things up. The St. David’s Islanders also husbanded poultry, ducks and cows—with turkeys running wild, their owners identified by a rag tied around one leg. Ruth Thomas had similar experiences, noting in Bermuda Recollections that growing up before the Second World War:

I think all families had a chicken coop in the backyard. Everybody had a back garden in which it was always possible to find pumpkins or sweet potatoes, string beans, carrots and onions. 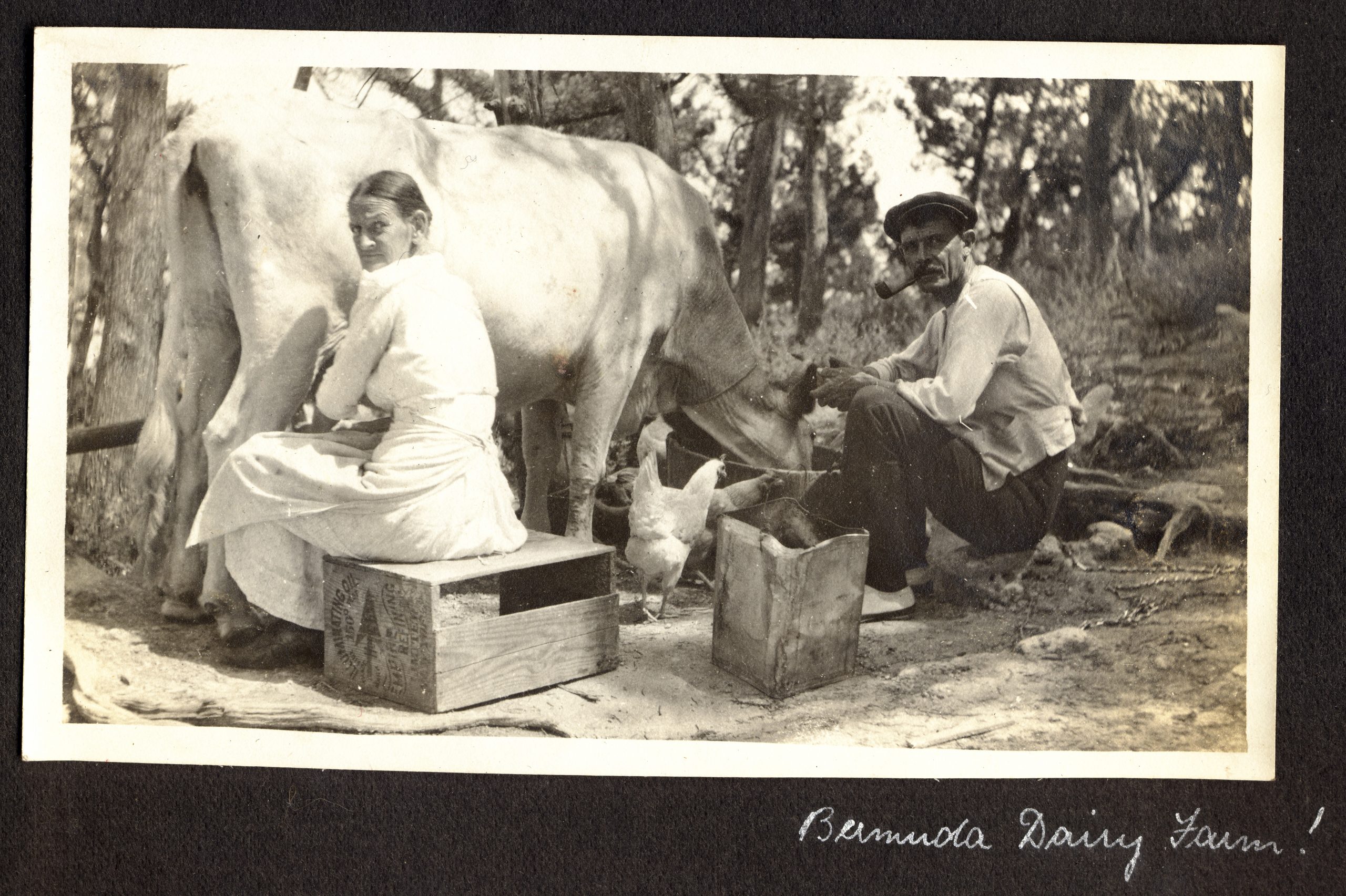 Woman seated on a wooden box milking a cow with a man seated nearby, c 1918.

McCallan, Director of Agriculture from 1920–1934, went on to write and publish The Bermuda Home Vegetable Garden in 1943—presumably to encourage self-sufficiency during the Second World War, when imported food supplies were not guaranteed due to u-boat activity between North America and Bermuda. Among the ships torpedoed by U-boats en route to Bermuda were the James E. Newsom, the Lady Drake, and the armed merchant ship City of Birmingham, laden with a large general cargo, including livestock feed. This last loss lead to the introduction of rationing in Bermuda. Over the last 60 years, small vegetable patches have largely disappeared from the landscape, but, as we face another “bust” period in Bermuda history, it looks like they will make a comeback. 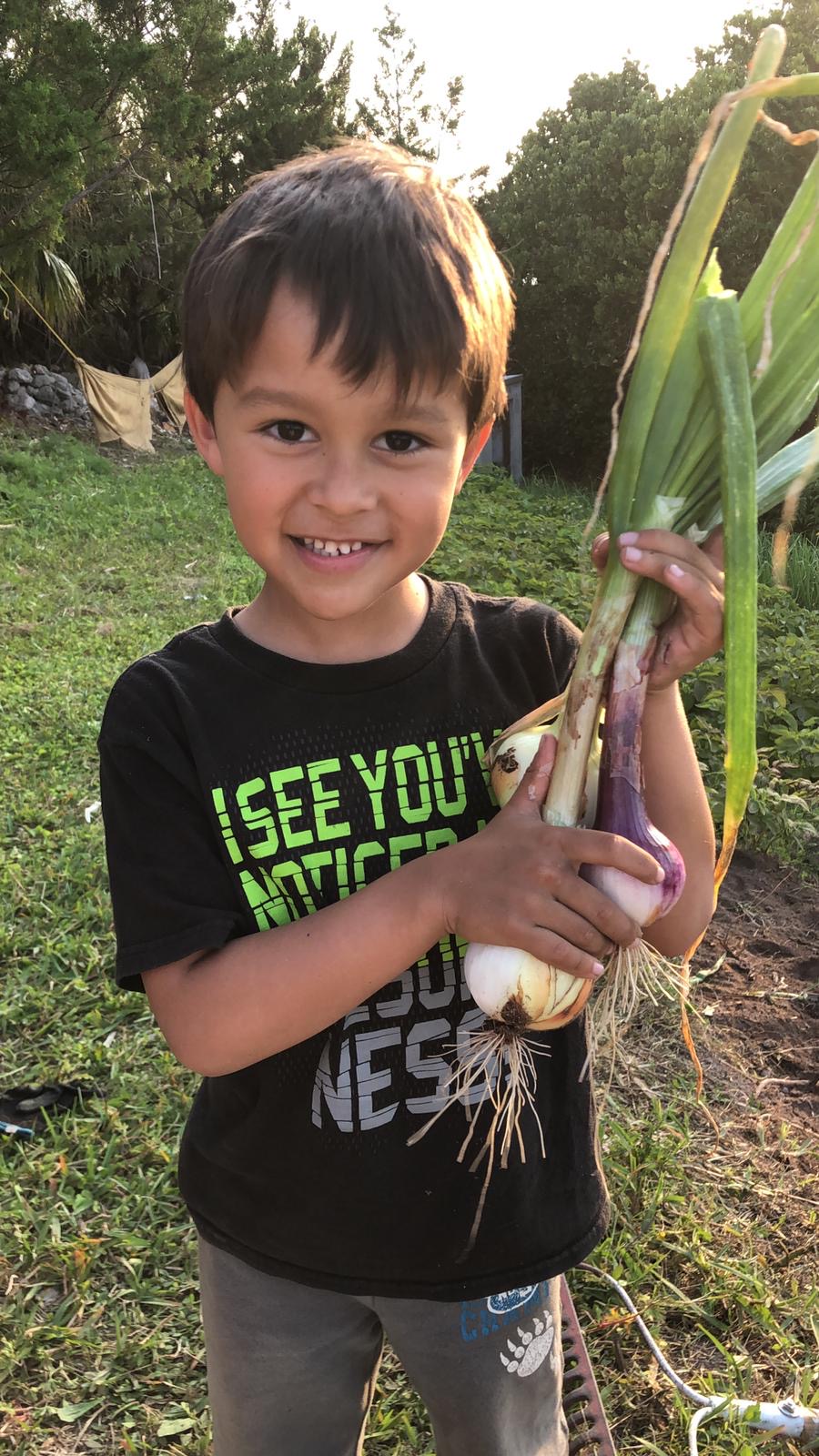 Andrew Harris with the crop from the Harris Home Garden. Submitted to United Together community collection. 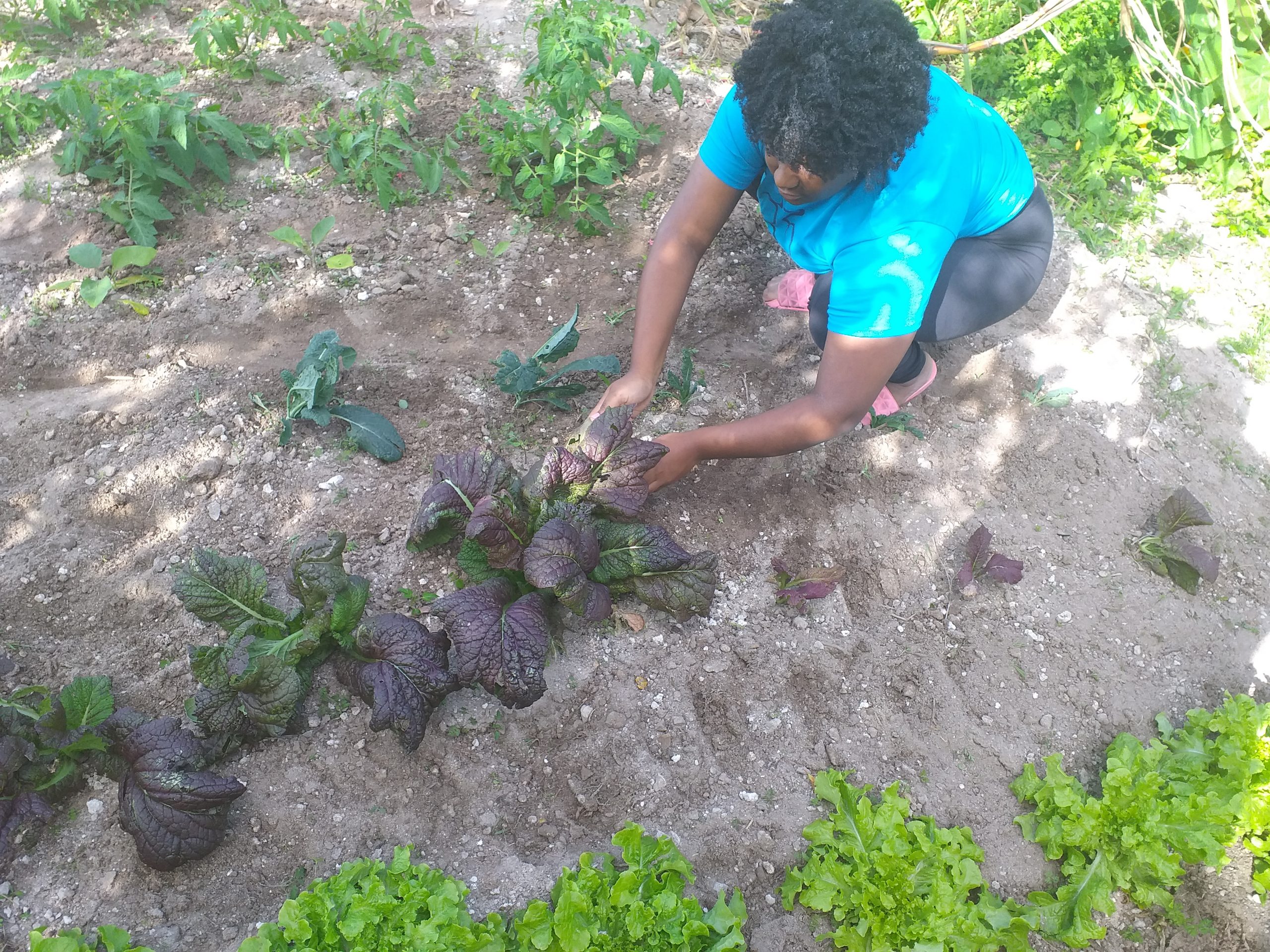 Ashley Stephens with her home garden, started during lockdown. Submitted to United Together community collection.

During this pandemic many things have changed and we find ourselves in a new world which requires face masks, social distancing and an increased use in technology to learn, work and stay connected with one another. However, interestingly we have also seen a resurgence of skills and activities which were commonplace decades ago but had been forgotten or lost. Social media platforms like Facebook and Instagram are littered with people’s experiments in bread-making, baking, sewing and gardening as people find things to do during this time.

People and companies like Sweet SAK bakery are sharing tips and recipes for baking and if you are interested in starting your own garden, check out the Bermuda Government’s planting guide or The Garden Club of Bermuda for information on what to plant this month and next. 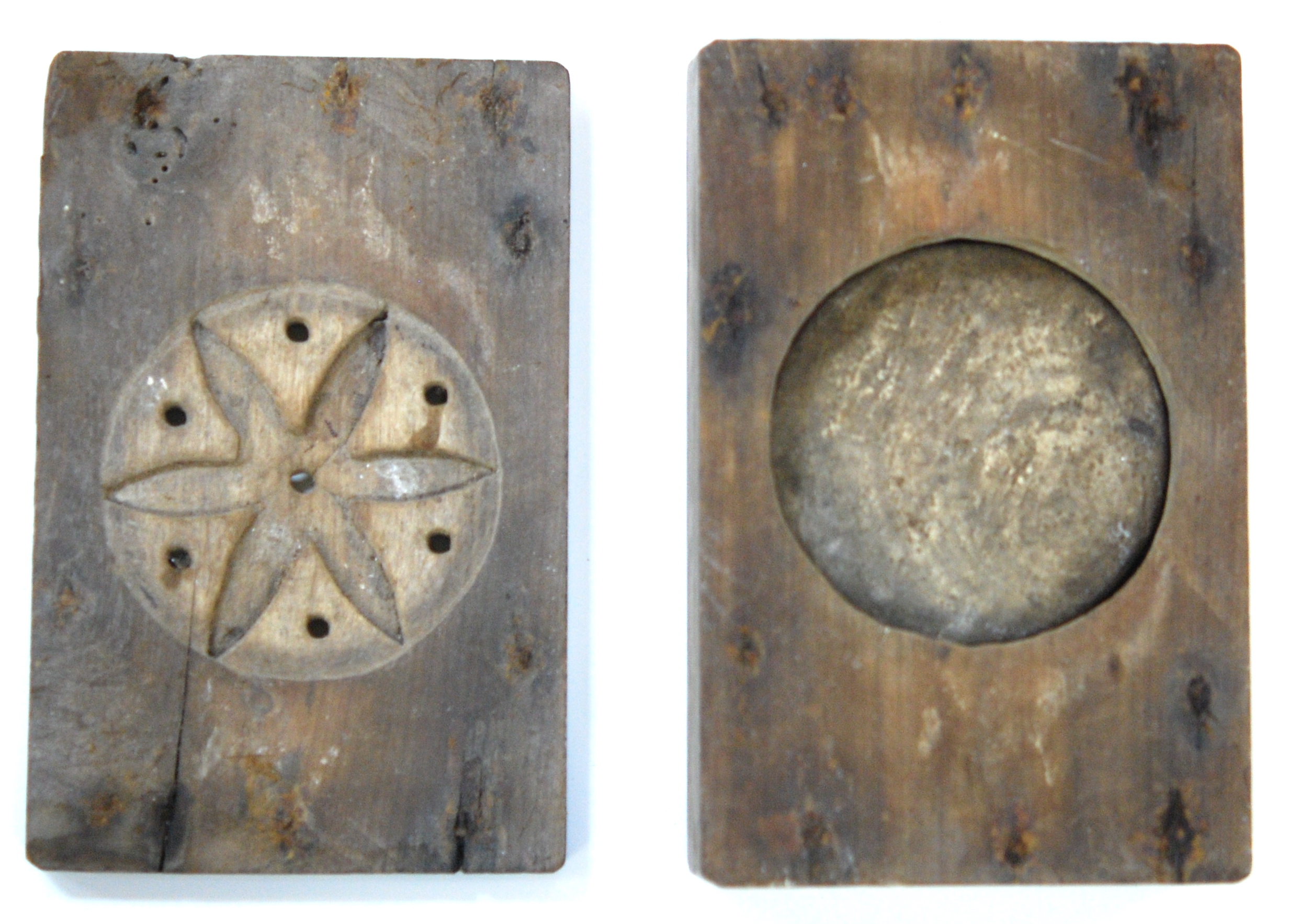