One-hundred and fifty-six years after Bermuda’s last major yellow fever epidemic and the language we see in the media is eerily familiar: local versus imported origin, contagiousness, quarantine, isolation, apparent recovery followed by catastrophic worsening. But this is the story, not of Covid-19, but of another deadly virus: the dreaded disease known for centuries as yellow fever, yellow jack, or black vomit, and described in modern parlance as “acute hemorrhagic hepatonephritis caused by an enveloped single-stranded RNA virus of approximately 12,000 base pairs belonging to the family Flavoviridae”. 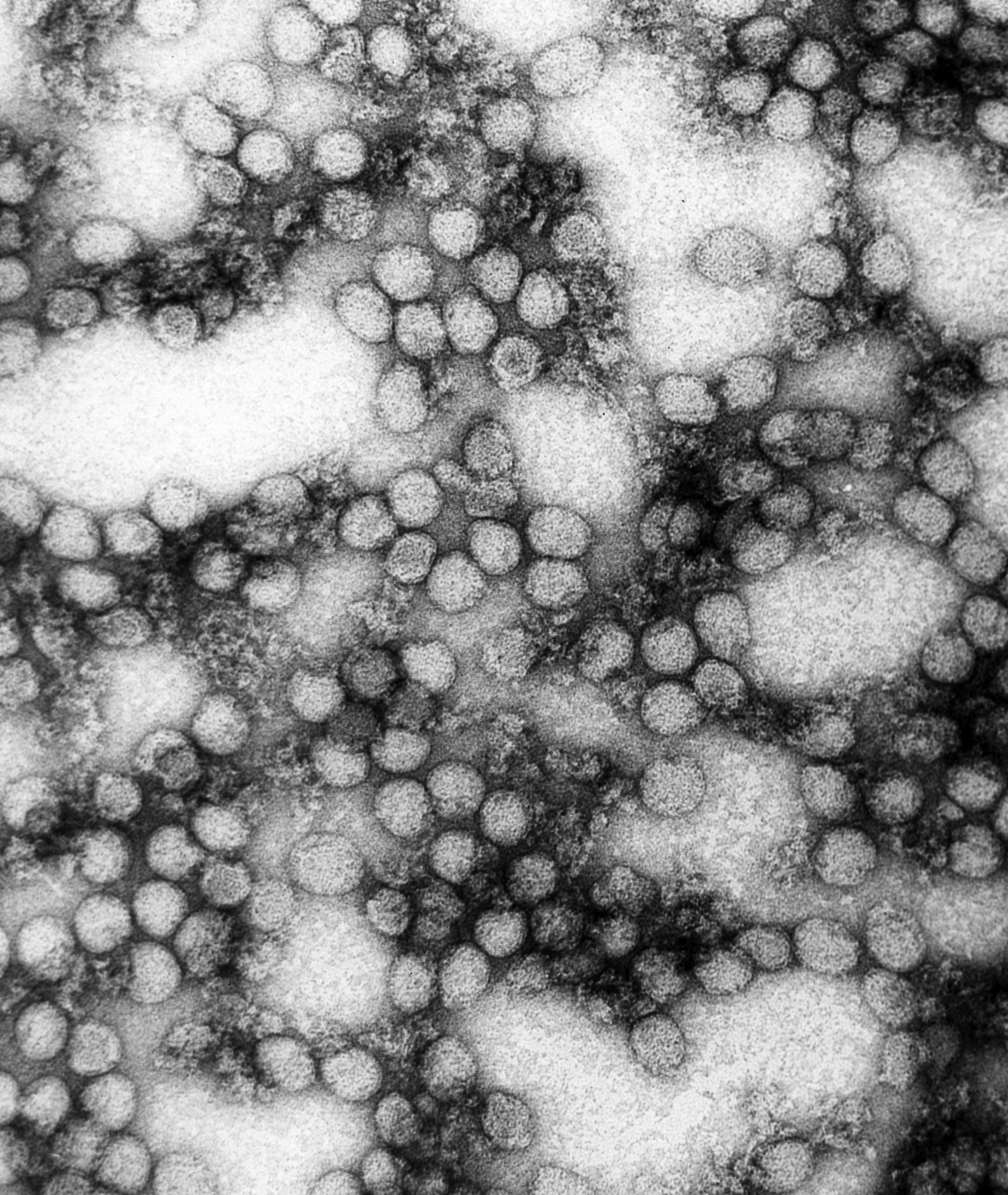 Modern analysis of various strains of yellow fever has established its origin in Africa, with a strain from West Africa making its way across the Atlantic on European ships. Some historians believe it reached the Americas with Columbus, but certainly the first major outbreaks were reported in the mid 1600s, including one in the Yucatan identified because it was called xekik or black vomit. In Bermuda, the first outbreak may have been as early as 1669 in St. George’s, with other outbreaks suspected and eleven confirmed between 1779 and 1864—the last four epidemics together killed over 2,000 killing between 2.5 and 7 % of the population in each outbreak.

The illness is brief, and has a sudden onset, with several days of fever, pain, exhaustion and vomiting. This is followed in 15% of sufferers by a very short remission of less than a day, before the onset of the final stage with marked yellowing from liver and kidney damage, abdominal pain, black vomit caused by internal bleeding, breathing difficulties, delirium, coma and death. 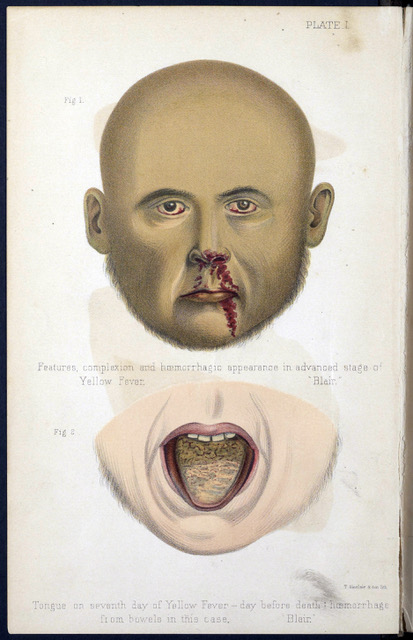 Such was the fatality rate and ensuing fear engendered by yellow fever that it affected at least two major historical events. The 1802 epidemic in Saint-Domingue likely thwarted an invasion of North America by Napoleonic troops, and later, in 1889 fear of yellow fever brought French construction of the Panama Canal to a halt when it became impossible to recruit staff.

In line with reports from other jurisdictions, accounts from Bermuda noted that Europeans such as British military men and Dockyard artisans were likely to be more strongly affected by the fever, and Bermudians less, with black Bermudians less affected than white Bermudians. In the Caribbean in the late 1700s, the death rate among British troops was as high as 70%. It is therefore not surprising that research into the Bermuda situation was driven by British naval and military concern. Reports were made on the 1843, 1853, 1856 and 1864 epidemics in an effort to determine the origins of the disease and the most effective responses. 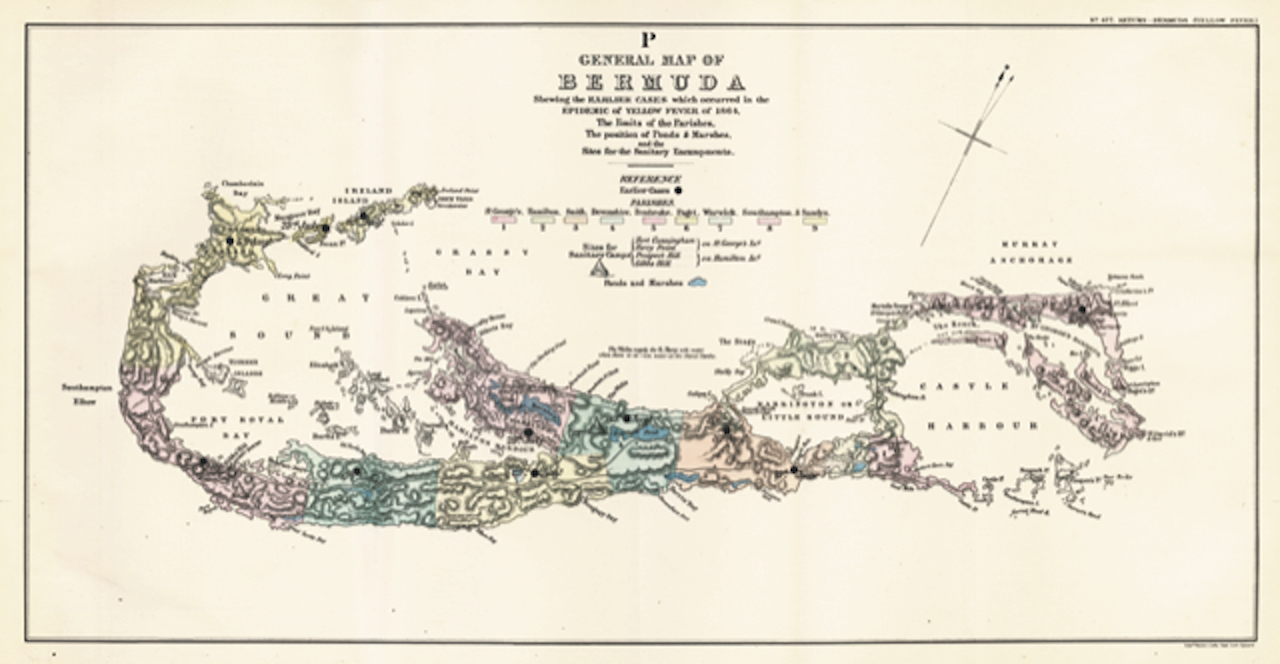 A map of Bermuda Shewing the Earlier Cases which occurred in the Epidemic of Yellow Fever of 1864. The limits of the Parishes, The Positions of Ponds & Marshes, and the Sites for the Sanitary Encampments.’, prepared by Captain Walker RE, as part of a report to the House of Commons, 1866

The origin and mode of transmission of the disease evaded discovery, but there were a number of theories. Some related to predisposing conditions or events, rather than to the cause: Governor Reid, writing on the 1843 epidemic, felt that fever was connected to “the Electric state of the air”; Presbyterian Minister James Morrison felt that intemperance was a contributing factor. Another report commented that “in the fever year of 1843, a comet was visible in Bermuda in the height of summer.” In a detailed report after the 1864 epidemic, the physician in charge of the Royal Naval Hospital at Bermuda felt that the fever epidemics were preceded by the development of an “epidemic constitution” arising from diseases experienced months earlier.

Other theories included importation via clothing belonging to people who had died of the  fever in the West Indies, transmission in the air arising from disturbance of mud by a convict ship  in St. George’s, introduction via a visiting Spanish war ship, and transmission via the smoke from victim’s burning bedclothes.

Casemates at the time of the 1856 epidemic: crowded, with poor sanitation and ventilation

One report noted that the Lagoon, near the Royal Naval Hospital might be a contributing factor. Not only was it close to the hospital sewage outfall, but it was used to dispose of refuse from the post-mortem room; and graves in the adjacent cemetery—which included yellow fever victims—were thought to be awash at high tide. The smell was foul. 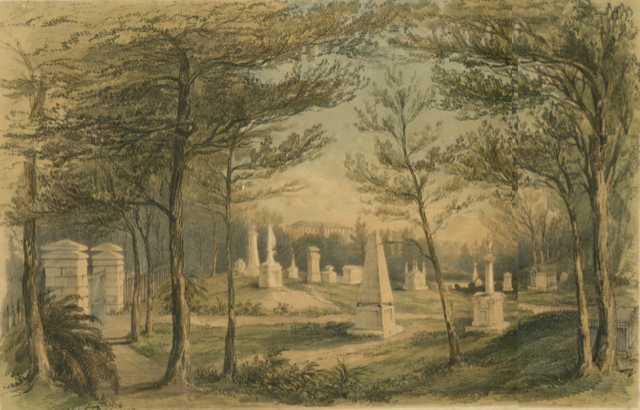 The Naval Cemetery, site of many yellow fever graves, and said to be awash at high tide, with the Naval Hospital in the distance, 1848

Many fever patients both military and local were nursed by Bermudians. One such nurse was the remarkable Eliza Lusher, born to enslaved parents, who nursed yellow fever patients in Dockyard in the epidemic of 1853, and in 1856 nursed 85 victims back to health, using her own medicines and supplies. 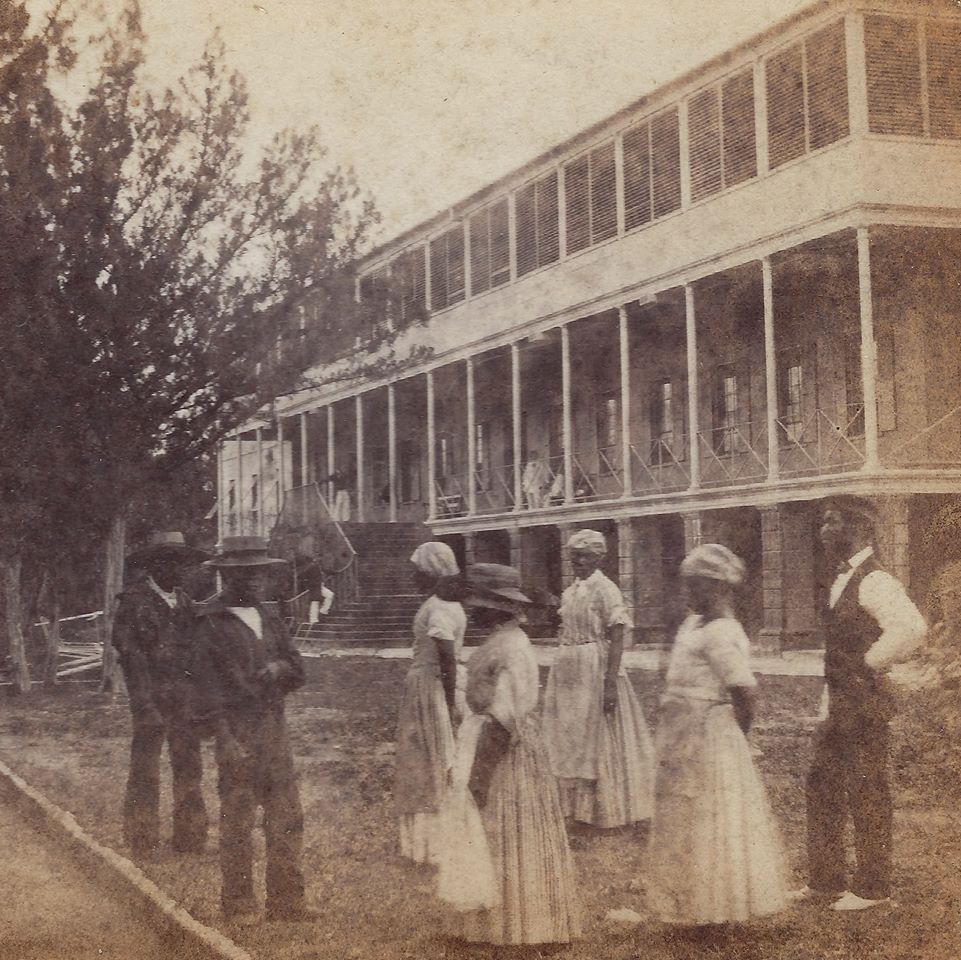 Efforts to treat and prevent the disease varied as medicine generally evolved, and theories as to the cause came and went. Mid-19th-century treatments included “prompt and full bleedings”, cupping and blistering, purgatives to clear the stomach, emetics such as ipecacuana and tartar to clear the bowels, and “administration of Spirits of Turpentine”. An 1853 article in the Scientific American noted that a remedy had been discovered in Venezeula, where a regime of the juice of Jamaica vervain (Stachytarpheta jamaicensis) given in “small doses three times a day, with an enema of the same every two hours” was said to be a “perfect cure”. Although Jamaica vervain grows in Bermuda, there is no mention of its use in treating yellow fever.

Later reports noted the importance of ventilation, spacious accommodations, good sanitation systems, removal to a different locality, and isolation of patients. Relocation was put into action for British troops, who were evacuated to tent camps at places such as Ferry Point, Bluck’s Point, and islands in the Great Sound.

Despite the local—and international—research and analysis, the mode of transmission was not fully understood until the early 20th century. The culprit was the mosquito Aedes aegypti, a theory proposed as early as 1881 by Carlos Finlay of Cuba but not proven for two decades. The final, research effort was prompted by US experience in the 1898 Spanish American War, when 12 US soldiers died of fever for every 1 killed in action.

Aedes aegypti, the mosquito responsible for the transmission of yellow fever 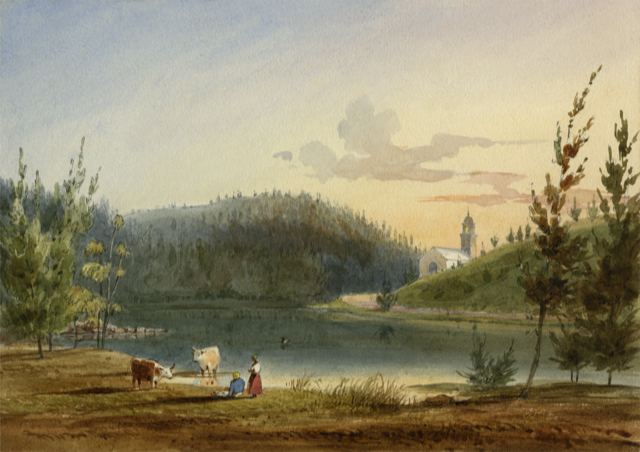 The mosquitoes bred in local swamps and marshes like Warwick Pond, depicted here circa 1833–36

In 1927 the virus itself was isolated using a sample taken from a Ghanaian man known only as Asibi. Culture and testing of the Asibi virus showed that it prompted an immune response in humans, and this strain, now known as 17D became the basis of a vaccine still used today. The principal researcher was awarded the Nobel Prize in 1951.

It was not until the 1980s that researchers discovered that only 1 in 7 infected with the fever developed symptoms, an explanation for the apparent immunity of many Bermudians who had no doubt survived earlier epidemics.