Codfish, Bermuda and the Atlantic World

Codfish cakes, hot-cross buns and kite flying are uniquely Bermudian Easter traditions and everyone has their own unique take on each one. Whether it’s a tried and true formula for working out the best length of tail for your kite or a secret family recipe for hot cross buns and codfish cakes, these traditions are incredibly important ways that not only connect us with our past but also with each other. Sharing those recipes or kite flying techniques with friends and family unite us and preserve those traditions for future generations. But did you know that these traditions have wider historical connections that link us not only with each other but with cultures throughout the Atlantic World and beyond? In this article we are going to trace the history behind one tradition in particular – codfish cakes.

When you bite into your codfish cake over the weekend—with or without a hot cross bun— you will be tasting a uniquely Bermudian tradition based on a food that forms the basis of dishes from Africa to the Americas, and from the Caribbean to Europe. Cod, a cold-water fish rich in protein, vitamins, and fatty acids has been valued as a food source and commodity and is embedded in the history of the African diaspora, indigenous North America and European cultures.

A dried cod market had been established in Europe by the Vikings, who used a simple drying method to preserve and transport cod. Cod was already a significant part of the Native American diet when Europeans first ventured into the rich waters of the American northeast.  It was plentiful, easy to catch, and, not surprisingly became one of the first significant products in the fledgling Atlantic World economy.

The Americas weren’t as dry as Scandinavia and the humidity wreaked havoc on the drying process that Europeans were familiar with. So the Basques and other Europeans turned to salt to help with preservation. Salted dried codfish was as hard as a wooden plank, easily shipped and easily reconstituted into plump white flakes. 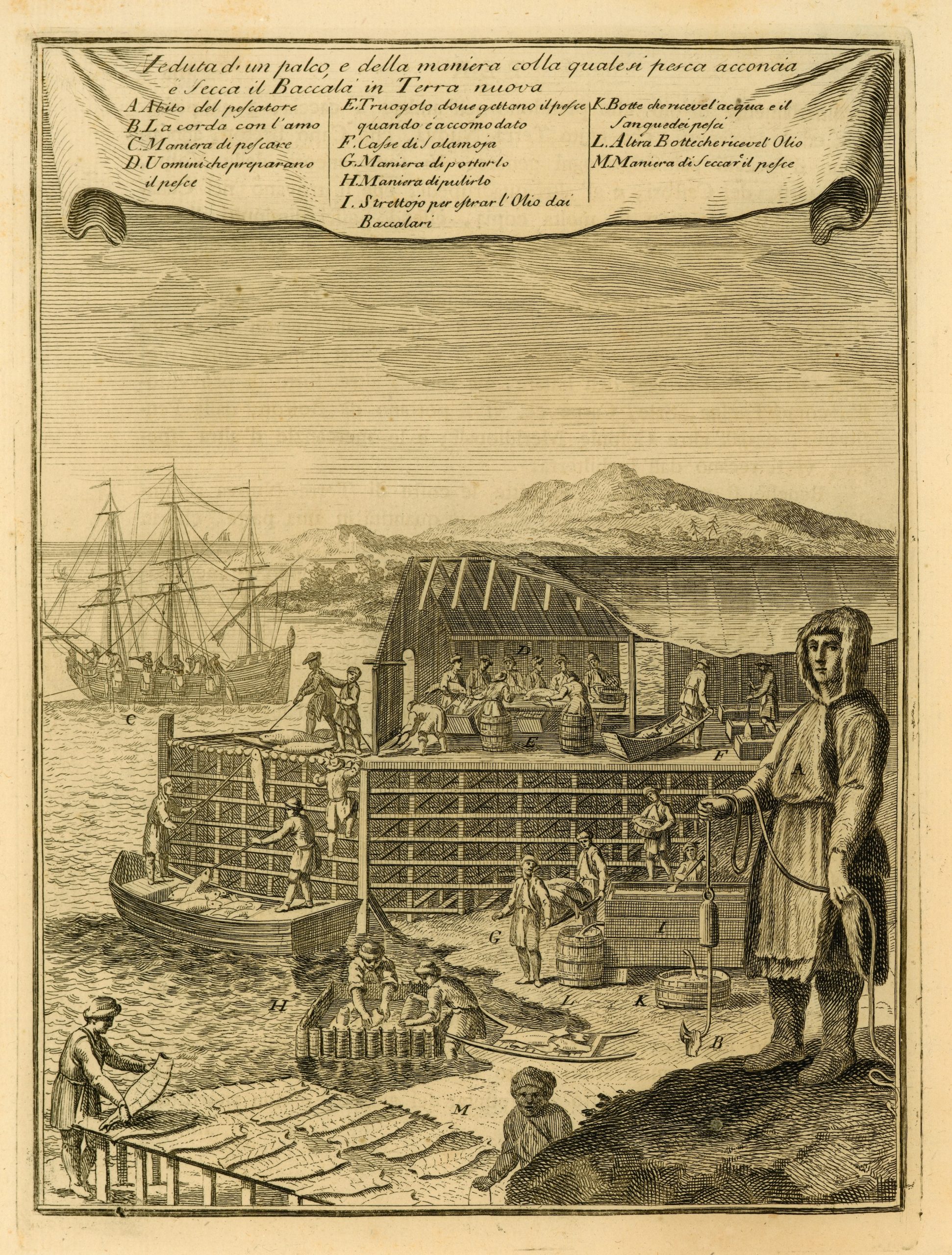 View of a cod or fish drying station (stage) in New France or Newfoundland, 1763. Includes men fishing for cod, unloading catch from a boat, processing and filetting fish, extracting the oil from the cod livers, drying fish on a rack, and packing it in salt. Courtesy of the John Carter Brown Library at Brown University.

With a large proportion of the European population reliant on fish, not only generally, but especially for Fridays and other Christian fast days, the cod fish industry boomed. European vessels came over to colonies in America and Canada for the summer to fish the Banks, competing for “rooms” or spaces along the coast where they could dry and salt the fish, before heading back to Europe.

Bermudians saw an opportunity and an act was passed in 1787 to encourage the cod and whale fisheries. Vessels like the sloop Trimmer headed north in June to take part in the seasonal industry. Like other Bermuda sloops, Trimmer was small, maneouverable, swift and weatherly and could even be rowed in a calm. They had such a successful season, that British fishermen felt threatened, and as a result Bermudians found themselves banned from the Banks.

Cut out of the fisheries as soon as they had started, Bermudians turned to a more profitable opportunity, capitalizing on the cod fishery’s insatiable need for salt—one account states it took 2lbs of salt to produce 1 lb of salt cod. Bermudians had already established salt-harvesting operations in the Turks Islands in the 1660s, and a century later the work was predominantly done by enslaved people. By combining the economies of exploited slave labour and the premium prices offered for Turk’s Island salt, this proved one of the most profitable trades in the western North Atlantic. 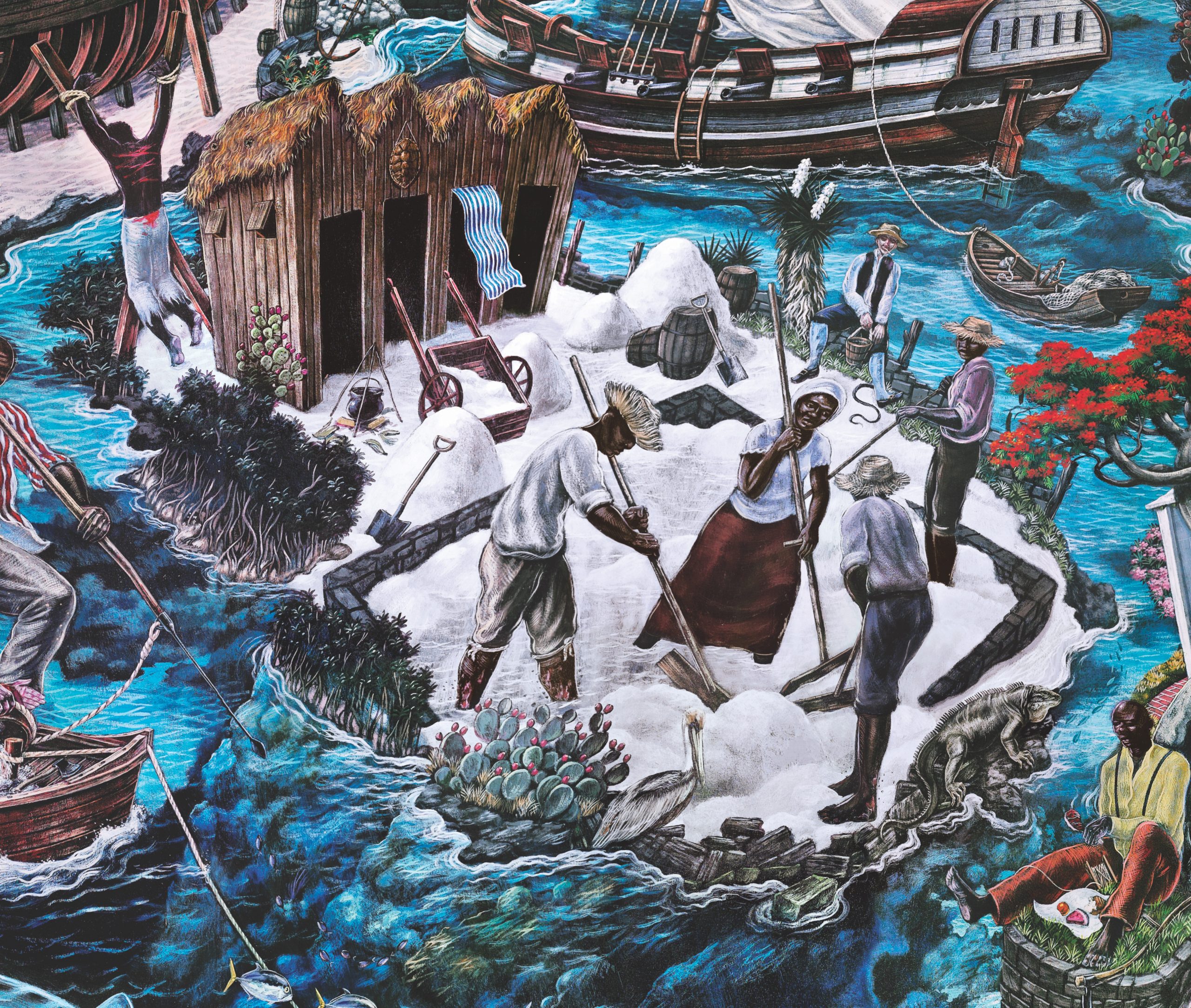 Hall of History: Salt raking in the Turks Islands

The hidden cost of the Turks Island salt was made clear when The History of Mary Prince, A West Indian Slave. Related by Herself was published in 1831. Prince worked in the salt pans for ten years, and described standing in brine up to her knees from four in the morning until darkness fell, with two short breaks for food.

“Our feet and legs, from standing in the salt water for so many hours, soon became full of dreadful boils, which eat down in some cases to the very bone.”

The salt thus harvested was offloaded from Bermuda vessels in the northeast and their holds refilled with dried fish to return south and take advantage of the Caribbean market for salt cod. Salt and protein were an essential component of the diet and key to productivity on Caribbean plantations. Slave owners, eager to cut costs, did not want to commit portions of land – which could be used for profitable crops like sugar ­– to grow the crops needed to feed the enslaved labourers on the plantations, so they turned to cod. Dried hard to survive in the heat and humidity, cod was over 75% protein and cheap.

Bermudians also took advantage of markets for cod in a network of trade linking Europe, West Africa, the Caribbean, North & South America. Cod was traded for timber and livestock in the American colonies, for wine in Portugal and the Mediterranean, for manufactured goods in England, and for slaves in West Africa. These ventures were so successful that, writing in the 1940s, E.A. McCallan could remember references to the ‘codfish aristocracy’ still in use in his childhood. 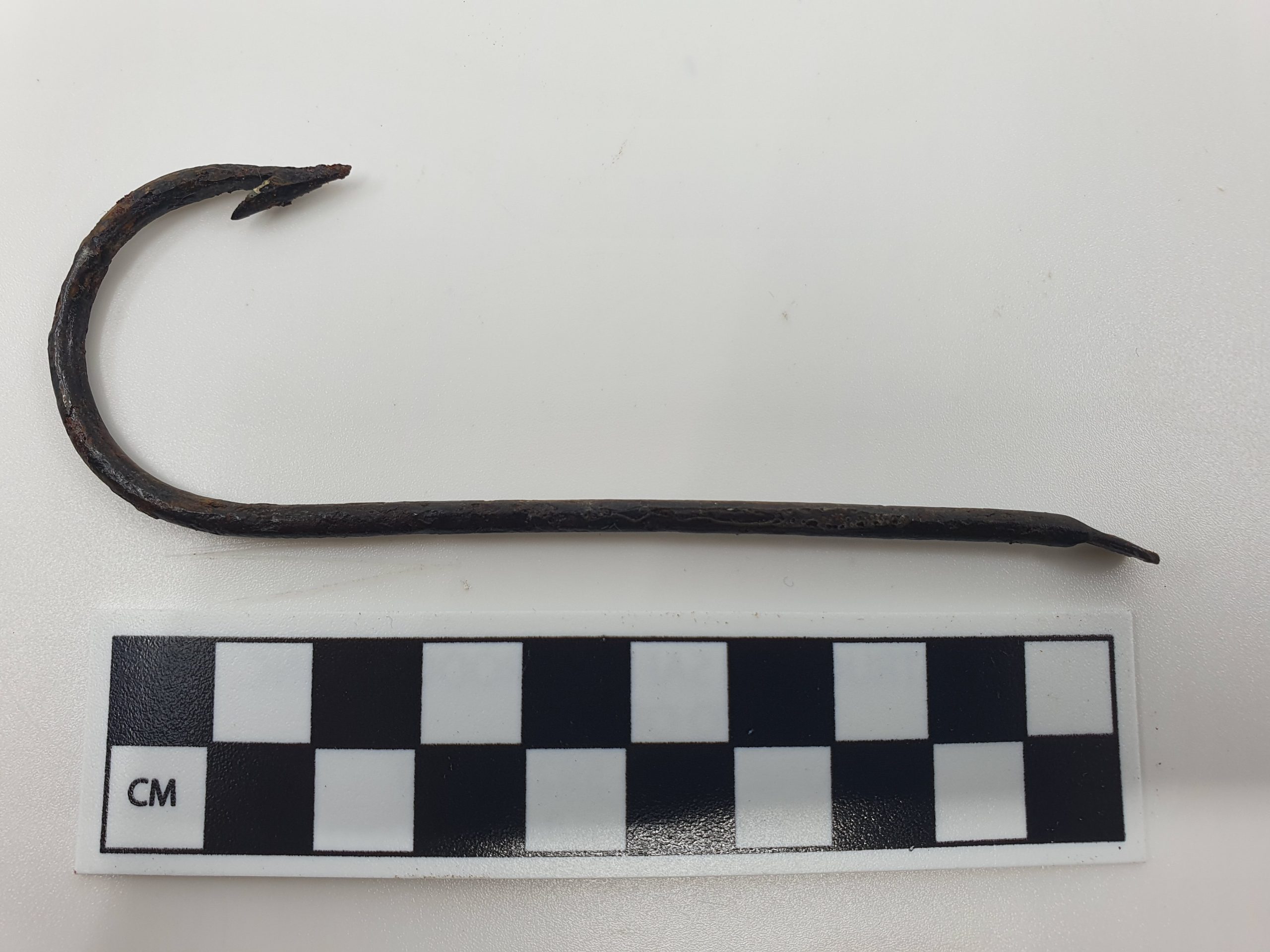 Codfish hook from the American schooner Sally, Lewis Marchand Master, wrecked on the Bermuda reefs en route from Halifax to Virginia with a cargo of codfish, 17 January 1786. Newspaper ad for auction of items recovered from schooner Sally

Cod was also useful at sea. Nathaniel Vesey, a Bermudian seaman, ate codfish aboard the Bermuda barque Sir George Seymour in the 1850s:

“We lived hard on the Seymour. Biscuit leftover from former voyages of convict carrying, beef hard and of the quality of Bermuda cedar, codfish boiled, eaten with pork grease.” 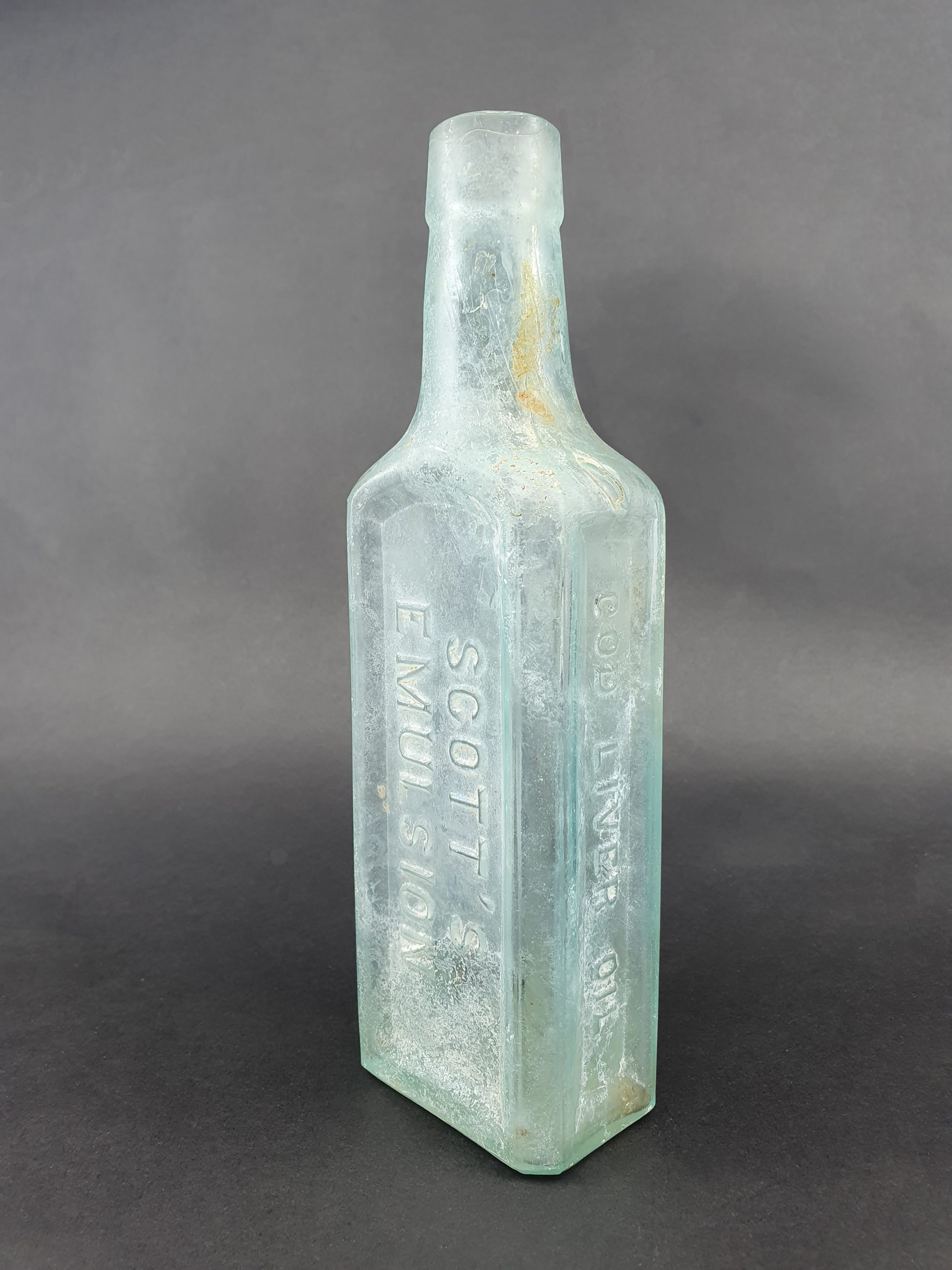 Cod liver oil, a by-product of the codfishery, was a standby in cupboards around Bermuda and was given to children to strengthen them. Scott’s Emulsion claimed to taste better than the others. 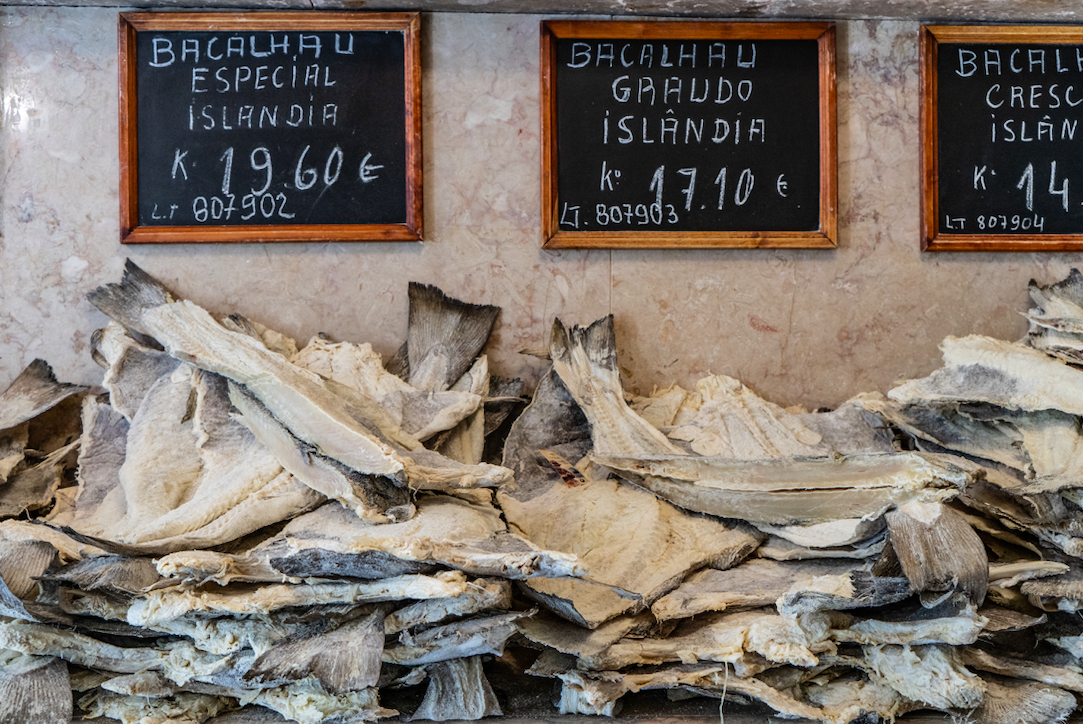 Though the Atlantic codfish market is still active, Bermuda’s role in the market as a supplier and shipper ended long ago. Throughout this weekend as we enjoy our codfish cakes, let us also take a moment to reflect upon the history of this food and the experiences of those whose back breaking work brought it to our tables.