For the month of February, the Museum has opened its doors for FREE to all local residents and offered free activities for Museum visitors on every Saturday in February.

One of our most popular activities this month has been palmetto weaving with expert artisan and historian Ronnie Chameau. In 1986, Ronnie revived the dying art of doll making, handcrafting dolls from banana and palm leaves. Since then, she been working  to preserve the art of weaving with plant based fibers and has gone on to create a variety of baskets from all-natural materials found locally, such as palmetto leaves, screw palm, cedar bark, honeysuckle vine and Chinese fan palm leaves. During her workshops Ronnie demonstrates how simple, organic materials can be used creatively to achieve the fashionable looks worn by women throughout the ages, such as hats, bags and fans. 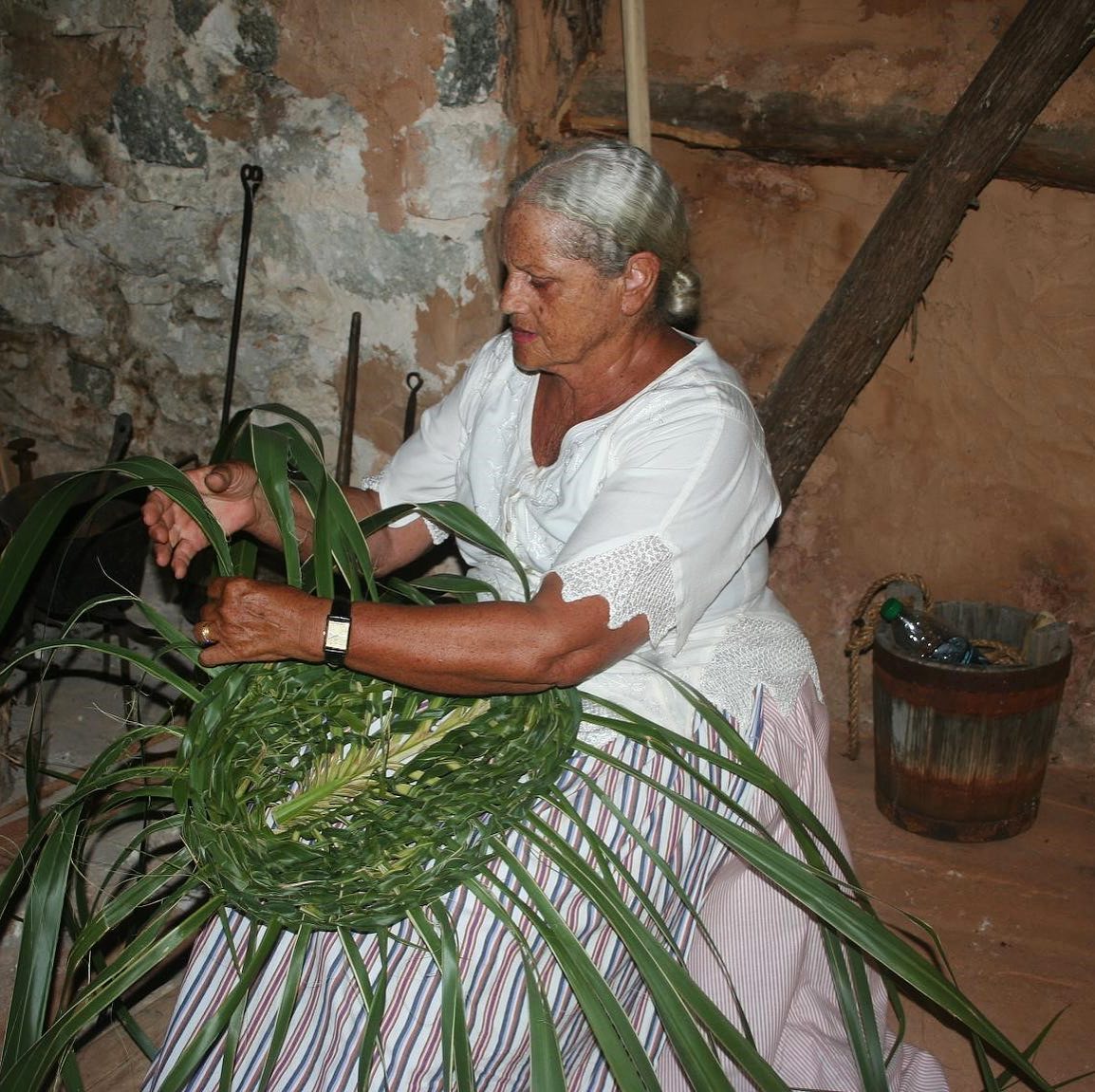 Archaeological evidence has traced the history of industries like weaving (basketry, textile manufacture, cordage, netting and sandals) as far back as the Upper Paleolithic Era (40,000-10,000 years ago). Termed “perishable industries”, the evidence of these traditions can be difficult to uncover in the archaeological record as the natural fibers that make up the artefacts often deteriorate over time, leaving little to no evidence of their existence.

Thankfully in Bermuda, and elsewhere, the tradition of palmetto weaving has been handed down from generation to generation and consequently is well documented in the historical record. Research conducted by Saskia Wolsak explores the cultural history of the Bermuda Palmetto highlighting the contribution and traditions of the various cultural groups in Bermuda which helped create our unique palmetto weaving tradition[i]. 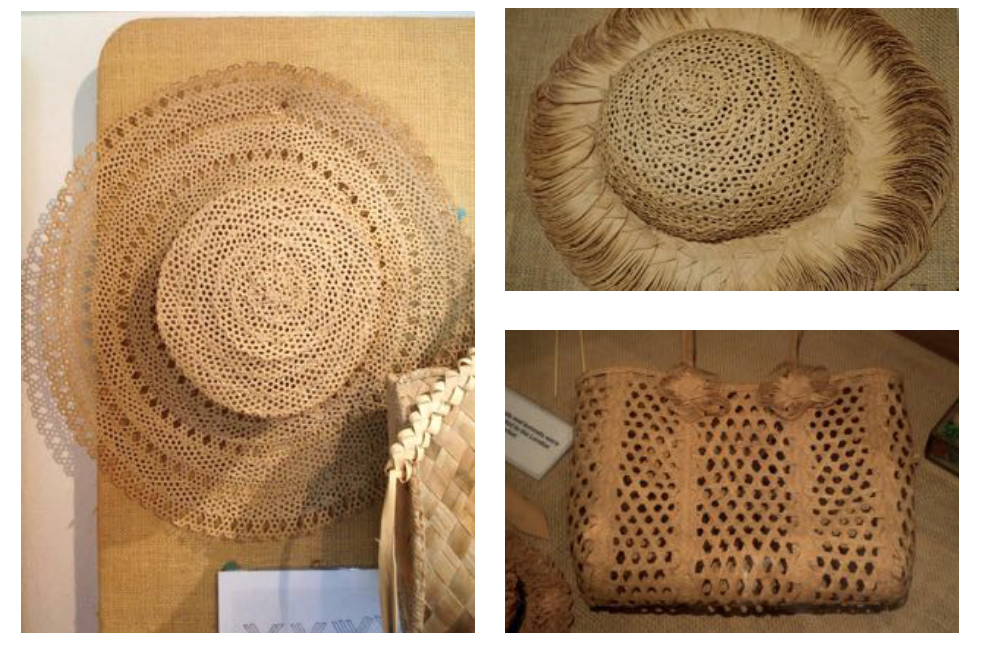 Examples of hats and handbag made with fishpot weave plait, on display in Carter House Museum, St. Davids. Photo by Saskia Wolsak

An essential resource in Bermuda from the island’s first recorded discovery in 1505 to the early 20th century, palmetto has been used for everything from food and drink to shelter and personal items. The terminal bud, fruit and ground seeds of the plant were a source of food (for human and animal alike) and the sap could be processed into fresh juice or fermented into wine. For stranded shipwreck sailors and early colonists alike, the local flora was essential for survival. Plant fiber could be worked into rope for bindings, rigging, or fishing material and shelter could be found by reworking the leaves into thatching and basic structures. 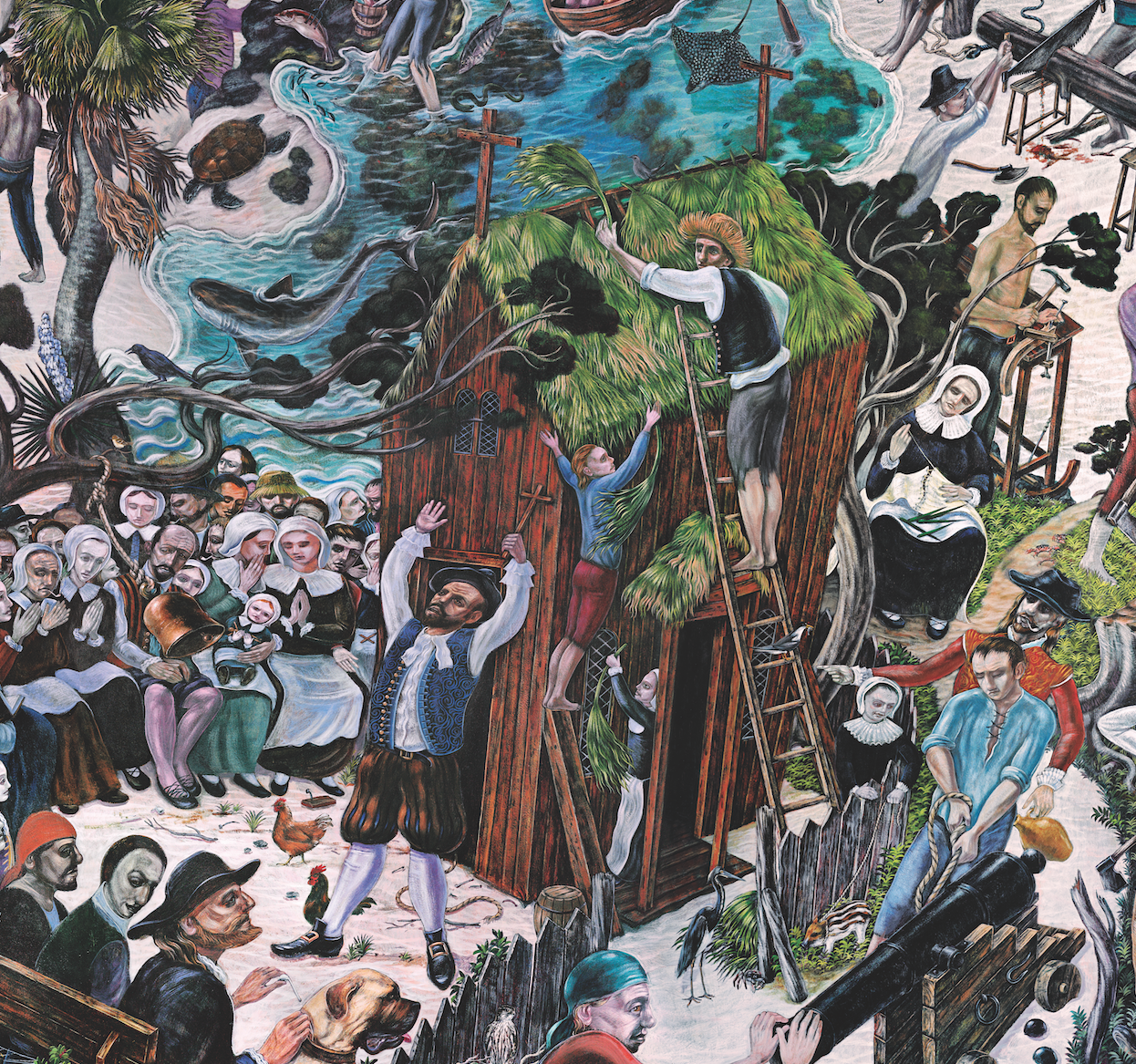 Henry May’s account of Bermuda in 1593, after wrecking on the island with a French ship, illustrates how vital palmetto was for castaways:

The tops of the Palmetta berries was our bread, and the iuyce we got out of the trees we cut downe our drink, and of the leaues, which are more than an Ell long, we couered our Cabens, and made our beds…

Many of Bermuda’s early settlers would have been accomplished basket-makers, rope-makers and weavers and Bermuda palmetto weaving is tied to Native American, African and European weaving traditions, with each culture contributing a unique style or technique to the practice.

English emigrants who had come to the New World for a variety of reasons, brought with them a blueprint—in their minds—for recreating the culture they had left behind. Likewise, the unwilling passengers aboard the thousands of slave ships that made the same crossing brought with them, against all odds, traditions from their homelands which would endure in a new and hostile environment.

As an isolated colony with limited access to imported goods, knowledge of local materials was essential and early settlers, especially those with limited wealth, were required by necessity to be resourceful. Over the centuries local inhabitants regularly used palmetto and other plants to make a range of objects from fishpots, baskets and fans to buttons, hats and mattresses. 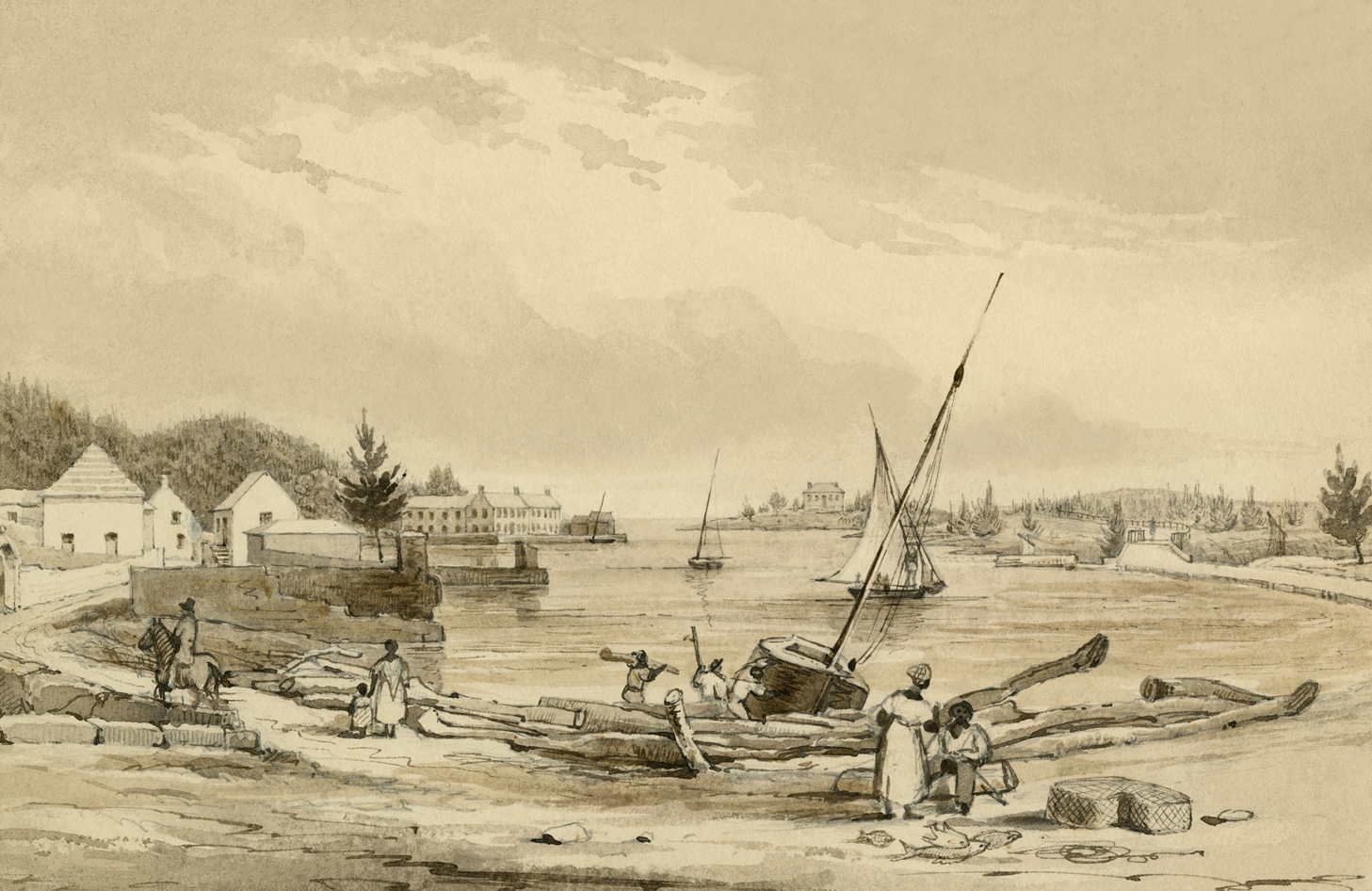 The “fishpot” braid or weave was a popular pattern used to make handbags and hats in Bermuda and took its name from a similar pattern that was used to make fishpots. A traditional arrowhead fishpot is visible in the bottom right in this painting by Dr. Johnson Savage. “The Flatts and its Bridge, under which is the entrance to Harrington Sound”, by Dr. Johnson Savage (1833-36).

By the late 1600s, plaited palmetto leaves were the source of a female-led export economy, keeping Bermuda in essential trade relationships with North America and Britain and facilitating the migrations of Bermudians and Bermudian knowledge to neighboring British colonies.

Today, thanks to the efforts of local artisan Ronnie Chameau, the tradition of Bermuda palmetto weaving is kept alive through workshops like those offered by the National Museum of Bermuda. Don’t miss Ronnie’s last two palmetto weaving workshops for the month  this Saturday (February 29th). Workshops will be held 11am—12pm and 1pm—2pm in the Queens Exhibition Hall in the Keep Yard at the National Museum of Bermuda. 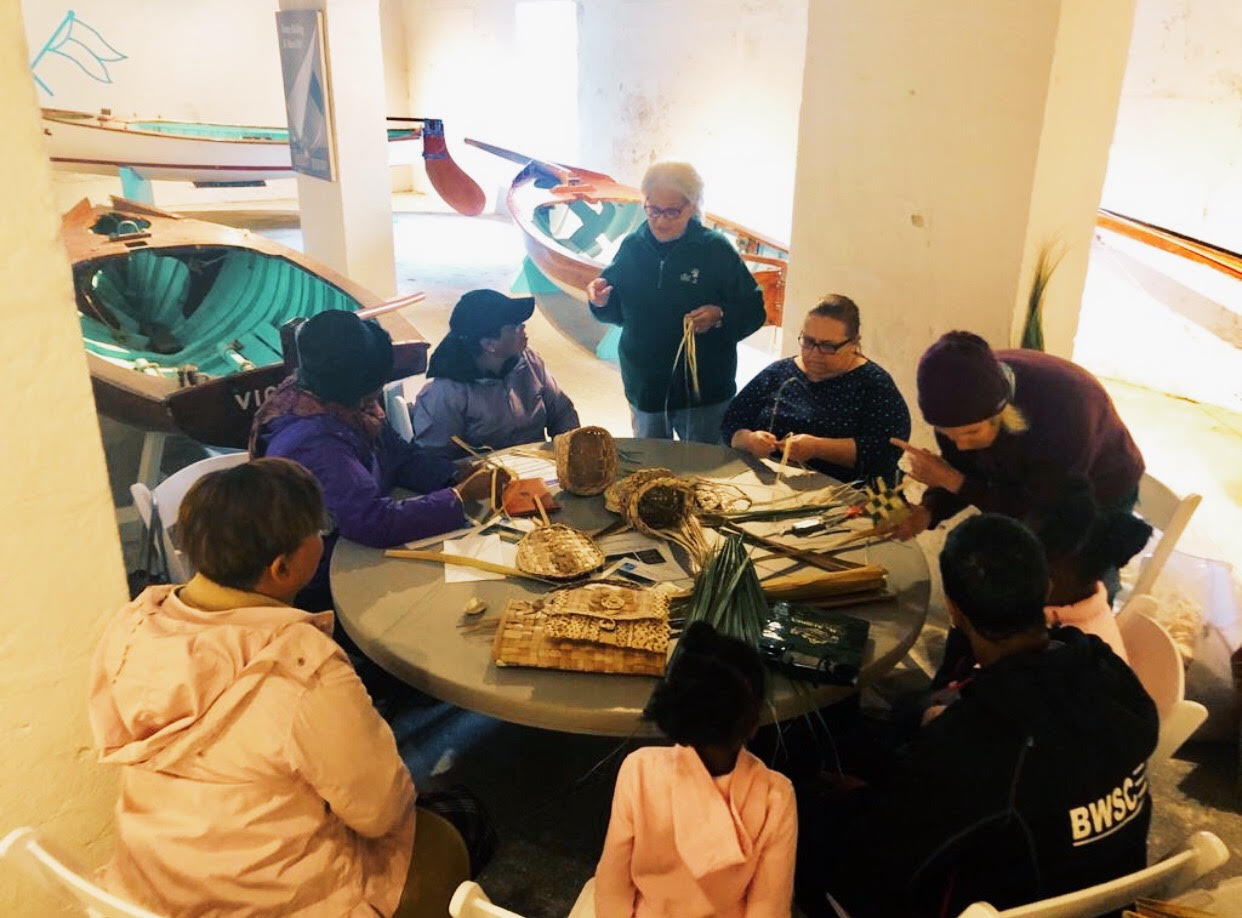 [i] Wolsak, S. 2017. Of Fishpots, Bonnets, and Wine: The Cultural History of the Bermuda Palmetto. MSc Thesis, University of British Columbia.